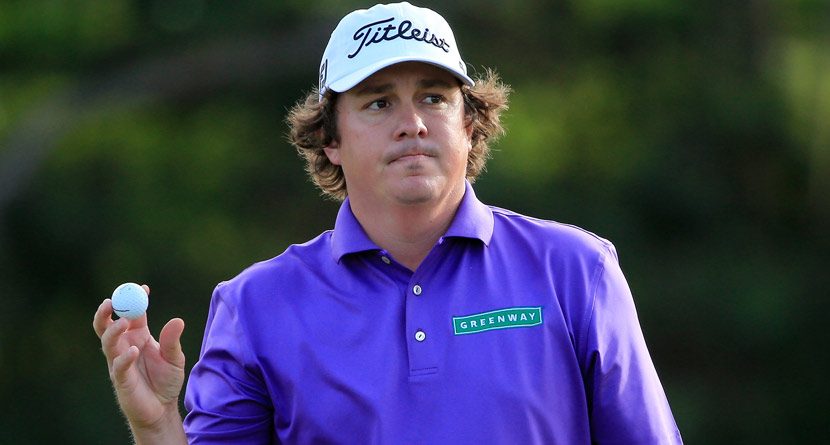 First of all, if anyone sees Matt Kuchar, tell him I said congratulations on finally breaking through and picking up that win you’ve been robbing from me the last three weeks. I didn’t realize there was so much pressure coming from my picking you to win. Glad you could finally clutch-up and cost me another victory. This is personal.

Sorry about that, just had to get it off my chest.

I won’t say it’s a certainty, but Rickie Fowler is probably going to win the Zurich Classic this week. While he wouldn’t continue the trend of first-time winners, a victory for the man in orange would be the first in a long time. Fowler is winless in his last 47 starts since picking up his one and only victory almost two years ago. Lately, he’s played great. He picked up a T-5 at the Masters and finished solo sixth at the Shell Houston Open. He finished T-10 here in 2012 and is overdue for victory No. 2. At 20/1, Fowler is a popular choice this week for very good reason.

If you’re looking for someone who might continue the trend of first-time winners, then you’re looking for Russell Knox. The Scotsman has played well and probably deserves a victory this year, but so far has come up just short. He finished second at the Honda Classic and comes into this event off a top-1o at the RBC Heritage. Knox is getting 30/1 in the Big Easy this week, rewarding the smart wagerer handsomely.

Graham DeLaet has been delayed in picking up his first-career win on tour, having collected five top-three finishes without breaking through to the winner’s circle. This could be his week for a few reasons. First of all, aside from his missed cut at the Masters, he’s been playing some pretty solid golf. Second, DeLaet finished T-4 here in 2012. Finally, this tournament has been in the habit lately of getting guys either their first win or their first win in a long time, and that track record bodes well for DeLaet. He’s been installed as one of the favorites but still offers plenty of return on investment at 20/1 should he win.

A guy who might be a stretch this week but is a proven winner on tour is J.B. Holmes. His game has been rounding into form over the last couple weeks and, going on the track record mentioned above, this could be the perfect opportunity for Holmes to get back into the winner’s circle. As a bomber, his game sets up nicely for the sprawling 7,400-yard test ahead of him at TPC Louisiana. This is your risk/reward play this week at 50/1.

As I said before, picking this tournament will be a cake walk. There are maybe six guys here who could win it. I’m going to give you four.

First, you’ve got to go with the favorites in tourneys like this. No way is a guy like Andy Sullivan or Romain Wattel going to win this week with guys like Poulter, Dufner and Stenson in the field. Of those three, I like Jason Dufner the most. Other than a missed cut at Augusta and a T-65 at the Northern Trust Open, Dufner has played some really good golf this year. He’s never won overseas but all great players eventually do and I think, all things considered, Dufner does this week. At 12/1, he’s the favorite paying the most in China.

The second name I’ll toss out is Pablo Larrazabal. Honestly, I have no idea if he’s in the shape he needs to be to contend but I’m going to take him because I want to see him win. I’ve been stung by bees before, but never 20-30 hornets at once. He went on to birdie the hole after being stung and finished the day at 2-under immediately following the incident at the Malaysian Open last week, but that was with the benefit of medical attention. Larrazabal has already taken down Phil Mickelson this year, and if he’s not intimidated by Lefty and a swarm of angry hornets, you’ve got to figure he can stand up to guys like the Duf Daddy and Ian Poulter. At 25/1, Larrazabal deserves a realistic look this week.

While this next guy hasn’t been great in the States as of late, he did finish second last week at the Malaysian Open in his return to the European Tour. Nicolas Colsaerts, the Belgian Bomber, said after his runner-up effort last week, “It feels good to be home.” Anytime a player returns to a comfort zone, they’re going to be dangerous. At 25/1, Colsaerts is probably getting a little less respect than he deserves, but who cares? All that means is more money for you if you’re smart enough to throw some shekels on him this week.

Finally, I want everyone to take a good, hard look at Julien Quesne. Coming off a T-5 in Malaysia last week, Quesne is a two-time European Tour winner looking to pick up his third title in three years. He may not be one of the favorites here this week and I don’t think he should be, but he might deserve a little more credit than he’s getting. At 40/1, you’ll be rewarded handsomely should the Frenchman adhere to the positive trend he’s been on.

That’s it for this week, folks. Tune in next week when I tell you how awesome the world is when Matt Kuchar isn’t out there breaking my heart.