Graeme McDowell Tees Off, Gets Startled by Cannon 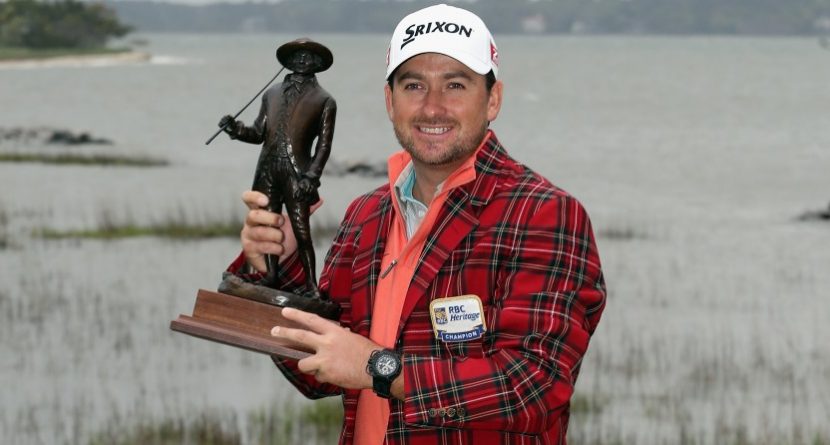 Graeme McDowell is the defending champ for this week’s PGA Tour stop, the RBC Heritage at Harbour Town Golf Links in Hilton Head, S.C. As is tradition, he got things started with a tee shot into Calibogue Sound using a hickory-shafted club.

Oh, and a cannon blasted from about five feet away as that golf ball began its flight into the water:

“I thought I hit it pretty well, considering I was about a foot off the ground a second later,” McDowell told The State, adding that no one warned him how loud the cannon blast would be.

The red sport coat on McDowell that you can’t see too well in the video is the tartan jacket that RBC Heritage victors receive (see photo above).

The Northern Irishman would like to hit a few more solid shots this week. Despite enjoying a solid season with five top-10 finishes in seven PGA Tour events, he’s coming off his worst showing of the year at the Masters, where he failed to make the cut.

“The Masters is like the final exam, followed by adult spring break here,” he said. “I got a big fat ‘F’ last week though, so I’ll be working harder this week.”

Other Hot Links:
– Will You Buy $1500 Google Glasses to Improve Golf Game?
– Play BubbaGolf on Your Smartphone
– Bubba Watson’s Son Already Training for Augusta
– Did You Know? Bubba Watson Only Has One Green Jacket
– Bubba Watson Sends Signed Masters Flag to Recovering Teen