Graeme McDowell Wins the OHL Classic at Mayakoba in a Playoff 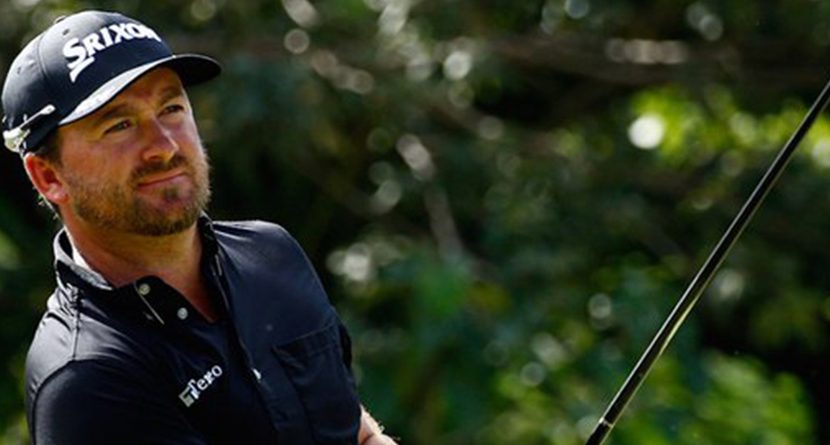 Graeme McDowell captured his first PGA Tour win since the 2013 RBC Heritage on Monday at the OHL Classic at Mayakoba, birdieing the first playoff hole to defeat Russell Knox and Jason Bohn. It was McDowell’s first and only top-10 of calendar year 2015 as well.

Returning Monday morning tied for a share of the lead at the soggy and windy El Camaleon Mayakoba Golf Club, McDowell could only manage four pars and a bogey (a three-putt on the 16th hole) over his last five holes. On the 18th tee with a one-shot lead over McDowell and his playing partner, Bohn, Knox bunkered himself off the tee and missed the 18th green. Unable to get up-and-down, the winner of the HSBC Champions a week earlier bogeyed the last to fall back into the three-man playoff.

After three good drives on the first playoff hole, the 18th, McDowell played into the green first, a 5-iron from 205 yards out.

Requests to “get tight” by McDowell were acquiesced and the 2010 US Open champ went on to claim his third PGA Tour victory.

The win was clearly a big step in the right direction for the Northern Irishman who recently recommitted himself following 12 months of uninspired play. McDowell credited his lack of form to living a happy life away from the course, enjoying his wife and new daughter, but heading into a Ryder Cup year, he wanted to get back to playing the game the way he knew how.

With exemptions expiring in the coming months and falling outside of the world top-50, McDowell needed a win or a series of good results to put him into major consideration heading into 2016. The win took care of that, earning him a trip back to Augusta where he has played each of the last eight years and solidifying his PGA Tour status for another two.

McDowell still sits outside of the top-50 in the Official World Golf Rankings at no. 62, but he made a noticeable jump that could very well act as a springboard going forward.

For Knox, his bid to become the first player on the PGA Tour earn his first two wins in back-to-back fashion since Camilo Villegas in 2008 came up one shot short, but his second consecutive top-2 finish moved him to no. 29 in the world.

Bohn keeps coming agonizingly close to his second win on the PGA Tour with his runner-up at Mayakoba becoming the third top-3 finish in his last four starts. This was his last event of 2015.