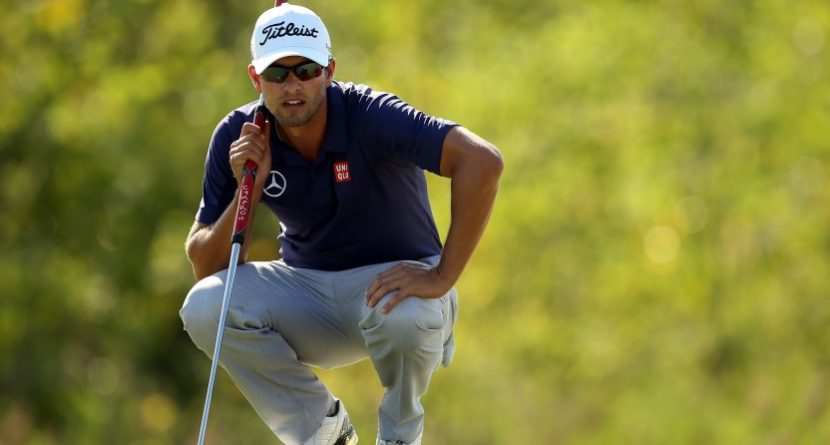 With three tournaments left on the PGA schedule, no one’s going to catch Tiger Woods’ five wins on the year. Technically, it could happen, but no one has ever won three FedExCup events in a row.

So that means Woods’ five victories have the PGA Tour Player of the Year award locked up for him, right? He who wins the most must be the best.

Not necessarily. It should be more about quality than quantity. And if you look at it from that perspective, Adam Scott should be your player of the year – as it stands today, of course.

Woods has collected nearly double the money as Scott – $8.2 to $4.6 million. He’s picked up solid victories at the WGC-Cadillac Championship, The Players Championship, and the WGC-Bridgestone Invitational. And he’s done all this in just 13 PGA events, never missing a cut.

But you’ll note that none of those are majors. Woods’ best result at a major was a fourth-place tie at the Masters.

That tournament, you may remember, was won by Scott, the first major of the Aussie’s career. He didn’t pick up another victory this season until Sunday at The Barclays, the first event of the FedExCup playoffs. That win catapulted him to No. 2 in the Cup standings and the world golf rankings – both behind Woods at No. 1.

Like Woods, Scott has started 13 PGA events this season, and he’s made the cut each time. But unlike Woods, he’s been mostly solid at all the majors.

The majors are really what count, right? Players like Woods and Scott essentially use the rest of the PGA Tour season to prepare for the four biggies. Like a swimmer or runner, they aim to peak for the most significant events.

Scott was the best player in the world this year at the four majors. If you take every golfer who made the cut at all of the 2013 majors and calculate their collective scores in relation to par, Scott was No. 1 at +2 overall. He won the Masters (-9), struggled to a T-45 at the U.S. Open (+15), then collected a T-3 at the Open Championship (+1) and finished the majors season with a T-5 at the PGA Championship (-5). Countryman Jason Day’s aggregate score was the same, but Day never won. Scott gets the edge.

Woods’ combined majors score, meanwhile, was +14. He placed in the top six twice, but also outside the top 30 twice.

In fact, Scott may have been the best big-tourney player last year too. He never finished outside the top 15 in a major, recording a T-8 at the Masters and runner-up at the Open Championship. Woods tied for third at that latter event, but tied for 11th, 21st and 40th at the other three. Rory McIlory, 2012’s Player of the Year, won last year’s PGA Championship, but in the other three majors he tied for 40th, 60th and was cut.

McIlroy won last year’s POY honors largely on the strength of that PGA victory and two subsequent FedExCup playoff triumphs. He didn’t win the Tour Championship (Brandt Snedeker did), but capturing a major and two playoff wins secured his award. That he also led the tour in wins (he won the Honda Classic in March) made his anointing un-debatable.

But the juicy dilemma exists in 2013 with Woods’ quantity of wins and Scott’s quality.

With the majors out of the way, the events to peak for now are the FedExCup playoffs, the second tier of major tournaments. Should Scott win at least one more playoff event, and Woods win zero, the Player of the Year award should go the Aussie. Should Woods win at least one playoff event, and Scott take no more, the award should go to the American. And if Phil Mickelson, the only other man who can be considered for 2013 POY, pops up and wins a playoff event, while Woods and Scott do not, the debate gets even thicker.

Recent history may be on Woods’ side. He tied for 38th at last year’s Barclays, but came back to finish third, T-4 and T-8 in the final three. He ended up in a four-way tie for second this past Sunday, one shot behind Scott. So his game’s there, but his back might not be. Woods often winced from back pain late in Sunday’s round, and he may skip the Deutsche Bank Championship this week.

A Woods withdrawal would only strengthen Scott’s case for POY. Because if the award were handed out today, Scott’s two big-time wins – and his stellar contention in the other majors – trump Woods’ five “regular season” victories.