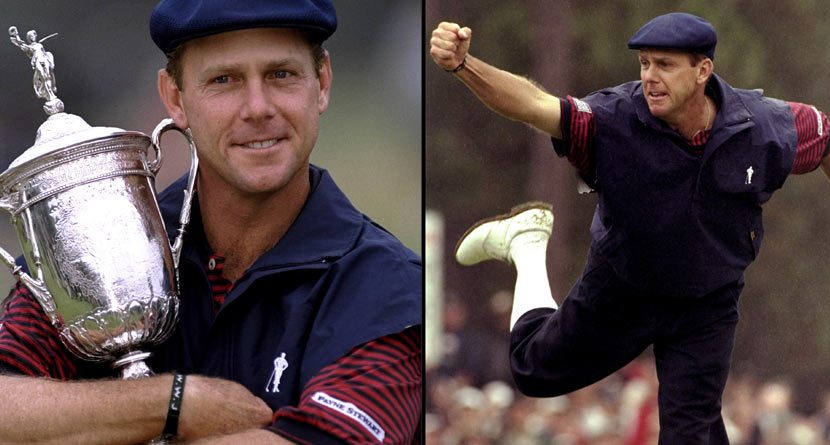 In 113 years of the U.S. Open, one of them stands out as the greatest ever. Was it Francis Ouimet winning as an amateur in 1913 for the first time? Nope. How about 1960, when Jack Nicklaus almost became the first amateur to win the U.S. Open since 1933? Ehhh, it’s close, but no. Maybe Tiger on a wounded knee, forcing and then winning an epic Monday playoff against Rocco Mediate? Again, close but no cigar.

The greatest U.S. Open ever contested came in the 99th edition, held in Pinehurst, N.C. Here’s why.

When you think of a what makes a great event — a truly great spectacle of sport — you have to have drama, marquee players, late-round drama, intriguing story lines, and did we mention drama? Sunday, June 20, 1999, at the U.S. Open at Pinehurst had all of that. The only edition that can boast the final-round firepower of 1999 was the 1960 U.S. Open when Arnold Palmer held off an amateur named Jack Nicklaus and greats of the game, Gary Player and Ben Hogan. Here’s a breakdown of why 1999 was so special:

Phil Mickelson: In 1999, Mickelson was already considered by many to be the best player in the game without a major title on his resume. He had already collected 13 wins on the PGA Tour and was coming off a T-6 in the Masters. On a personal note, Lefty and his wife, Amy, were also expecting their first child at any time. Early in the week, Mickelson acknowledged that should his wife go into labor, he was willing to leave to be by her side. At the beginning of the final round, Lefty sat at even-par in solo-second place.

Payne Stewart: His name will forever synonymous with Pinehurst Resort, the No. 2 course and the U.S. Open thanks to his win there in 1999. Following Stewart’s death later that year, a statue of him was dedicated and now watches over the course’s 18th green. Coming into the 1999 U.S. Open, Stewart had already won the AT&T Pebble Beach Pro-Am and was looking to redeem himself following his heartbreaking loss at the 1998 U.S. Open, where he lost the lead and the tournament on the 72nd hole. Going into Sunday, Stewart held the lead alone at 1-under-par.

Tiger Woods: For Tiger, 1999 was just the beginning. Sure, he was already a major champion, having won the 1997 Masters in record fashion. But for the most part Woods had shown promise and given us a glimpse into the greatness yet to come. He had collected nine total wins on tour and was fresh off his first career win at the Memorial. To begin the final round on Sunday, Woods was tied for third at 1-over with Tim Herron, two shots behind leader Payne Stewart.

David Duval: He burst onto the golfing scene in 1997 and by all accounts, Duval was the next best thing to Tiger Woods. He had won 11 times on tour from the start of 1997, and four times already during the 1999 campaign. Yet to win a major, Duval had already had a couple of close calls, finishing T-2 in the ’98 Masters and 11th or better in three-fourths of the majors leading up to the U.S. Open at Pinehurst.

Vijay Singh: The third name on this list that had spent or would spend time as the world No. 1, Singh came into the 1999 U.S. Open as the defending PGA champion and had won eight times on tour. The greatest player ever to come from Fiji started Sunday in a tie for fifth at 2-over, three shots behind Stewart.

All week long, the U.S. Open at Pinehurst provided the challenge that players and fans have come to expect from America’s major championship: a fair test with scores close to par. No player ever got further than 3-under-par for the week, and the four who did all did so on Thursday. As any major up for consideration as the “best ever” must do, the 1999 edition of the U.S. Open weeded out the pretenders and left us with five of the game’s best players duking it out on Sunday.

And really, could you get any better than the five stars in contention on Sunday at Pinehurst 15 years ago? Today, between the five combatants, you have staggering numbers. Woods, Stewart, Mickelson, Duval and Singh combine for 26 major championships and 179 wins on tour. Other than in 1960 (when Nicklaus, Player, Palmer, Hogan, and Julius Boros combined for 46 and 241), try to find five players with better combined credentials who were all simultaneously vying for the same title. You can’t.

On the back nine on Sunday, Mickelson and Stewart went back and forth on the uber-challenging layout. When Stewart would falter, Mickelson would hold serve. When Mickelson slipped up, it was Stewart staying strong. With the final group through 16 holes, Stewart, Mickelson and Woods shared the lead at even-par with Singh lurking at plus-1.

With the Open on the line, Payne Stewart stood on the tee at 17 with a chance to win the tournament he loved the most; Phil Mickelson on the precipice of his first major title. Both players hit beautiful tee shots onto the green, setting up birdie putts that could be considered easy, were they not happening on the 71st hole of the U.S. Open.

With a one-stroke lead going to the 18th, Stewart took driver and got one of the more unfortunate breaks anyone has ever gotten with a major championship on the line:

What followed was one of the grittiest up-and-downs in major championship history:

And with that putt, Stewart triumphed at Pinehurst and put his stamp on the history books. His post-round comments and the graciousness he exhibited in victory helped to solidify the legacy that Stewart would leave behind just four months later.

Immediately following its conclusion, the 1999 U.S. Open was one of the greatest ever contested. Like a fine wine, however, that Open at Pinehurst has become even better with age. In the wake of the events of October 25, 1999, the outcome almost seems fated. Before our very eyes, we watched Tiger mature, Payne paint his masterpiece, and the beginning of Phil’s inexplicable streak of heartbreak in the U.S. Open.

It wasn’t quite a crossroads the way the 1960 U.S. Open was, with Ben Hogan in the twilight of his career, contending for the final time as a young Jack Nicklaus was making his first real charge in a major. But in a way, it marked the beginning of Tiger vs. Phil and, without knowing it at the time, the final chapter for a legend.

The following year at Pebble Beach, the 100th edition of the U.S. Open was held without its defending champion. The field paid tribute to Stewart in many ways that week, most notably with many players wearing knickers, mimicking Stewart’s signature look, and with a golf-style 21-gun salute, with players ceremoniously driving tee shots into the water off the 18th fairway at Pebble Beach.

Tiger Woods, who finished T-3 at Pinehurst, trounced the 2000 field in record fashion, finishing the week at 12-under and winning by 15 shots. Mickelson continued to hold onto the moniker of “best to never” until 2004, when he broke through and won the Masters. Since then, he’s won two more green jackets, a PGA Championship and an Open Championship, and has added five more U.S. Open runner-up finishes to his one in 1999.

While Stewart passed away 15 years ago, his legacy lives on through those who knew him best and through the PGA Tour’s Payne Stewart Award, given each year to the player who best exemplifies the qualities that Stewart exhibited. Among players, it’s one of the most coveted awards.

As the U.S. Open returns this year to Pinehurst for the second time since 1999, Stewart’s memory and legacy will surely be a huge part of the festivities and celebration all month long. Which isn’t a bad thing since it’s always fun to remember our heroes and their greatest moments.