Guess What? Phil Is Annoyingly Good 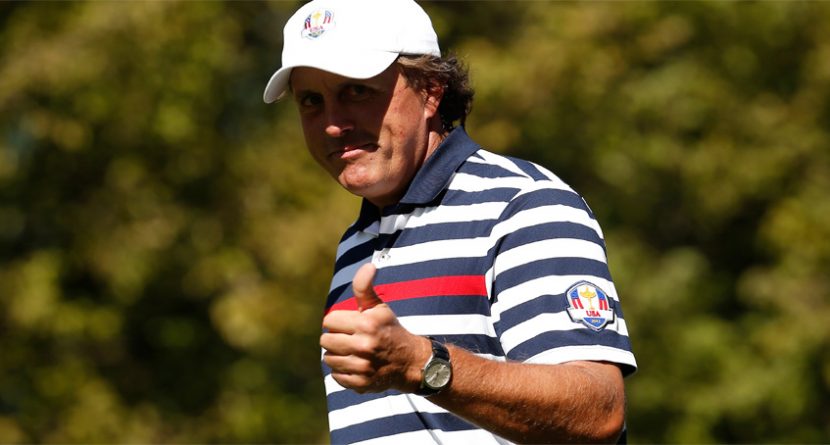 Fine, I get it. He’s one of history’s best golfers – a Hall of Famer, as of this year – and is beloved by fans worldwide. He takes the time to sign hundreds of autographs in between hitting ridiculously-risky golf shots in the world’s toughest tournaments. He’s won four major championships. His caddy, Jim “Bones” Mackay, probably has a heart condition because of Lefty’s carefree playing style.

Even worse? Phil knows it.

Phil knows how good he is. If you walk up to a group of PGA Tour players on a practice green and inquire about the talent of Phil Mickelson, they’ll turn around and tell you to ask him. His nickname is FIGJAM; “F**k I’m Good, Just Ask Me.” Don’t think for a second that nickname doesn’t fit. Phil’s not shy to remind you of its truth.

Personally? I’m a fan of Tiger Woods. I can’t stand Phil Mickelson and his goodie-two-shoes, “aw shucks” smile nor his hideous Callaway golf visor. He’s the Ohio State to my Michigan. The Cub to my White Sox. I yearn for him to fail. It pleases me. I enjoy watching it.

But I can’t possibly deny the talent this man possesses. On Thursday at the 2013 US Open, Mickelson once again proved that he’s the real deal. He reminded all of us that he’s a legend in this sport and no red-eye airplane flight was going to keep him from walking into Merion Golf Club and playing his ass off.

At the time of this writing, Mickelson is at 3-under par; securely in second place and one shot behind Luke Donald. While erratic at times, his play in the first round was masterful. It sickened me to watch.

Phil Mickelson is very much in the driver’s seat after one round of the 2013 US Open, whether I like it or not. Furthermore, as much as I would hate to admit, Phil is really that effing good.