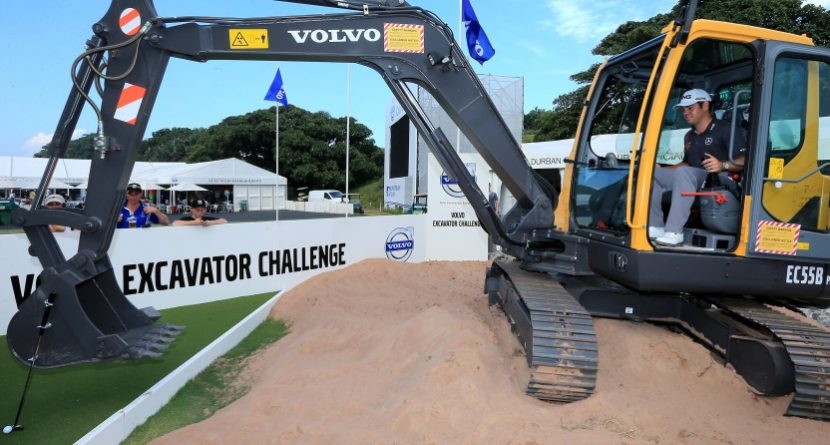 Volvo makes some nice cars, but everyone knows that. Did you know it also produces top-quality construction equipment? For those not yet aware, Volvo once again brought along some of its machinery to a golf tournament it’s sponsoring, which this week is the Volvo World Match Play Championship in England.

While advancing to the final eight of the tournament, Henrik Stenson hopped in an excavator and attempted to sink a putt — the Excavator Challenge. Uncharacteristically, it lipped out:

Henrik Stenson attempts to hole a putt with a digger. #VWMPC

But it wasn’t just the pros who gave the diggers a go:

How many events let you try to hole a putt with a digger and hit a shot off another? Must be a @volvoingolf event! pic.twitter.com/7Ln5OfJwXh

And an excavator is actually up for grabs if anyone sinks a hole-in-one on the 16th. Graeme McDowell, the kind soul, said he’d give it to Louis Oosthuizen if he won:

Gmac said if he won the digger available for a hole-in-one at 16, he’d give it to Louis Oosthuizen! #VWMPC pic.twitter.com/CSPjQlVl4o

G-Mac was obviously joking, because the South African already owns a Volvo excavator. Seriously. For winning the team pro-am at the Volvo Champions in Durban, South Africa, in January, Oosthuizen won a car. But he didn’t need a car; he needed an excavator for his farm on the southern coast of his homeland.

So he convinced tournament officials to let him trade in the car for an excavator, which was a hole-in-one prize no one was able to claim.

“I’ve been nagging my wife for a few years that I want something on the farm as there are a few stumps and things I need to get rid of,” Oosthuizen said in January. “And that’s why I stood over that putt on 18 for a bit longer than normal. So I’m going to play around with it and might dig out a few bunkers.”

That excavator went nicely with the customized tractor Oosthuizen purchased soon after winning the 2010 Open Championship.

And while we’re on the topic of excavators – not a subject we cover much in these parts – those of us on this side of the pond can try one out the next time we’re in Las Vegas, which happens to be where the PGA Tour is playing this week.