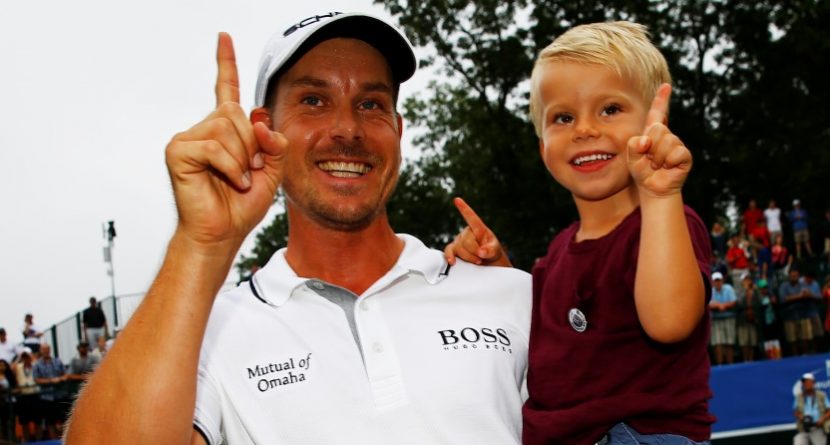 At one point early last year, Henrik Stenson ranked 230th in the world golf rankings. He improved enough to qualify for The Barclays, the first round of the 2012 FedExCup playoffs, but he never sniffed contention for the Cup. He ended the year 117th in the FedEx standings, and 53rd in the world rankings.

The Swede’s story is much different this year.

After knocking on the door at the season’s final two majors (runner-up at the Open Championship, third at the PGA Championship) as well as at the World Golf Championships-Bridgestone Invitational (tied for second), Stenson finally broke through the door Monday at the Deutsche Bank Championship. A final-round 5-under-66 handed him a two-stroke victory over Steve Stricker. His overall 262 tied the TPC Boston course record.

Stenson during trophy presentation: “I know it was #BostonStrong day today and I’d like to donate $25k of these earnings to that cause.”

The triumph not only gave Stenson his first PGA win since The Players Championship in 2009 and a $1.44 million check; it gave him the top slot in FedExCup standings. The 2,500 points that come with a playoff win moved Stenson from 13th place to 14 points ahead of Tiger Woods, who finished 18 shots back in 65th place.

The win also gets Stenson into the Tour Championship for the first time. The BMW Championship comes first, beginning Sept. 12 at Conway Farms Golf Club near Chicago, followed a week later by the PGA Tour season finale at East Lake Golf Club in Atlanta. The only other time Stenson has reached the BMW Championship (which features the FedExCup standings’ top 70) was 2007. He didn’t make it past The Barclays in 2012, and didn’t reach the playoffs any other year.

In addition, Stenson’s title on Monday put him in rare company. Along with this playoff victory and the Players crown, he also won the WGC-Accenture Match Play Championship in 2007. He’s now only the fifth player to grab wins in a playoff event, a World Golf Championship tournament, and The Players; Woods, Phil Mickelson, Adam Scott and Matt Kuchar are the others.

As in his other stellar performances the past couple months, Stenson stayed close to the leaders all tournament. He started Monday in second place, two strokes behind Sergio Garcia. Things stayed that way through the first three holes, when both players parred Nos. 1 and 3, and bogeyed the second hole.

But Stenson pulled even at No. 4 when he birdied the 298-yard par 4 and Garcia bogeyed. Both made birdie at No. 5, but Stenson then stole the lead for good with a third straight birdie at No. 6, which Garcia parred. Stenson carded another birdie at the eighth hole, while Garcia gave up strokes at seven and nine.

All Stenson had to worry about on the back nine was Stricker, who stood at 2-under for the day through nine holes and then recorded seven straight pars. But he birdied 17 and 18 to put a bit of pressure on Stenson.

And Stricker looked to have a chance at a playoff when the Swede sent his approach shot into a greenside bunker on 17. Moments later, though, Stenson clinched the trophy by holing out from there. It was the only bunker he found all tournament.

Helped by a greens-in-regulation rate of 84.7 percent, Stenson carded only three bogeys over the four rounds, to go with 25 birdies.

That makes him the man to beat heading into the final two rounds of the FedExCup playoffs.