How Rickie Fowler Will Change Golf 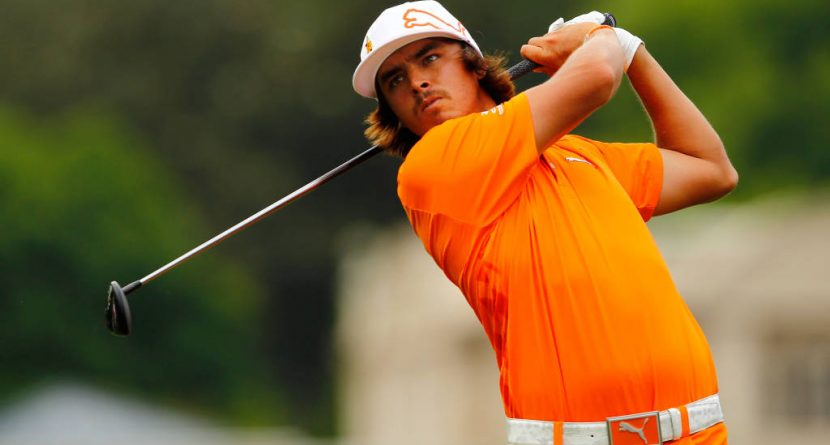 Ladies and gentlemen, we’ve seen the future of golf-and it’s bright orange. Rickie Fowler took home his first PGA Tour victory this weekend at the Wells Fargo Championship, likely the first of many wins. And if he becomes the force that most people expect, he has the chance to shake up the whole attitude of the game. Here’s how Rickie Fowler will forever change the world of golf.

Players will focus on their personalities

Golf’s an individual sport, but for so long, no one looked like an individual. Some pros have dabbled in developing a signature style-Ian Poulter designs his own clothes and Camilo Villegas created his unique “spiderman” move – but Fowler has taken it off the charts by dressing like a human highlighter. And where the personality goes, money follows: Rickie made millions in endorsements before he had ever won a tournament. Now that everyone’s realized the value of personality and individuality, I bet we’ll see more golfers get in on the action. (Maybe Steve Stricker will start wearing hot pink pants on Sundays? We can dream.)

More young fans will get involved

To a kid that’s 12 years old, Tiger Woods and Phil Mickelson must seem really old. Tiger played his best golf around the time that kid was born. Rickie’s the new fan favorite for young golfers (just check out all the Puma hats in the galleries), and he’s showing the next crop of players that golf can be fun, flashy and even cool. Plus, while Woods looked like a muscular superhero in his prime, Fowler just looks like a regular guy. That’s great for the future of the game.

Rickie Fowler’s swing is not textbook, but that’s why a guy who weighs 150 pounds can hit 330-yard drives. Along with his pal Bubba Watson, he’s a shining example of how a homemade swing can get great results. After an era of too many swing thoughts and endless TV shows about mechanics, casual golfers and pro golfers will see the value in trusting their natural swing.

Courses will drop the dress code

At the public courses I’ve been to lately, they either allow jeans or they don’t really enforce their policy against them. That doesn’t make traditionalists happy, but if it makes more people feel comfortable at the golf course, that’s fantastic. I expect Rickie’s backwards hat and flashy fashion to inspire golf to get more casual and freewheeling.

Fowler’s mustache might be totally 70s, but his Twitter habit is straight out of the 2000s. He even has his web address on the back of his Puma hat. This next generation of kids has never known a time when the Internet didn’t exist; as a result, social media is going to be required for pro golfers to gain a following. Sooner or later, Tiger Woods will have to figure out how to fist pump in 140 characters or less.

Non-golf companies will get into the game

Looking back 20 years, can you imagine companies like Red Bull and Puma ever sponsoring a golfer? It would’ve been unthinkable. But now that Fowler’s broken through with a win, expect other youth-centric brands to get into the sport. Oakley has already jumped into golf by sponsoring Rory McIlroy, which makes it likely that in the not-to-distant future we’ll see a golfer in head-to-toe facebook gear.