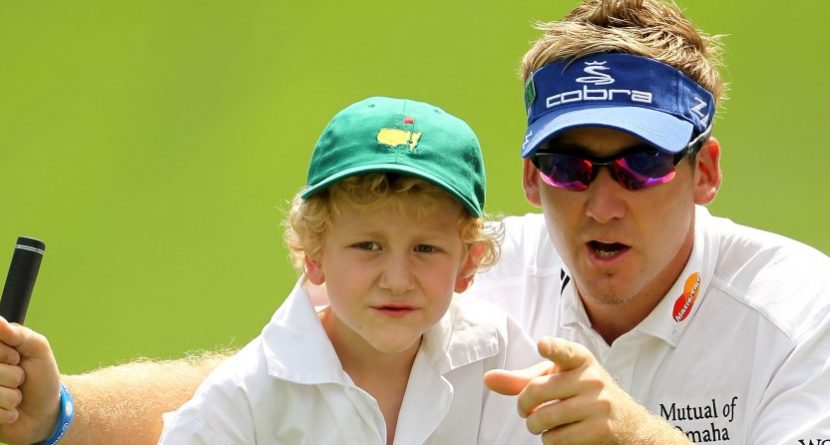 Friday represents Ian Poulter’s 38th birthday. But if you ask him, he’s still a 12-year-old.

Thanks for all my kind birthday wishes. Don’t feel any older, probably look a little older, But my brain still keeps me mentally about 12.

Nonetheless, he’s the father of four, and this was one of their gifts to him:

That’s the latest in a fun string of kid tweets from the Englishman, who’s been getting plenty of time with the family of late, prior to making his season debut later this month at the Farmers Insurance Open at Torrey Pines. Earlier this week, he posted a priceless photo of his youngest child chillin’ in a golf bag from the 2008 Ryder Cup:

That came a few days after Poulter finished carrying the bag for his oldest son, who won his age group title at the U.S. Kids Golf Foundation’s Orlando Local Tour Championship. Pops live tweeted during the round, and the kid received praise from some of Dad’s Ryder Cup teammates:

Luke looking good on the range. Warming up. http://t.co/xOBeABwfpd

So amazing to caddy for Luke today. So very proud of how he conducted himself even on a disappointing hole. Very exciting.

Congrats Luuuuuuuuke! RT @IanJamesPoulter And Luke James Poulter has Won today which means he wins the boys 9 Order of Merit.

And there he is with his trophy. I think he might sleep with it tonight. Luke’s big day http://t.co/v28KIlxzr6

@IanJamesPoulter congratulate little Luke for me! A bit late to the party I know! Been on hols in Aspen.