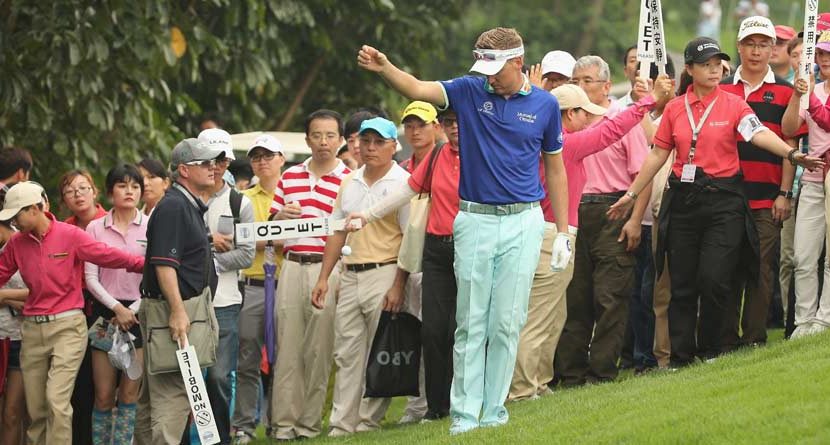 Golf has a lot of rules, many of which are hard to remember. During the second round of the Volvo China Open on Friday, Ian Poulter made the mistake of forgetting one of those rules. Poulter was hit with a two-stroke penalty for taking an illegal drop, making an eight on the hole, which led to a second-round 74.

After his round, Poulter made fun of himself on Twitter, calling himself a “nobhead” and a “helmet.”

I’m such a ¥#%$¥+€ helmet, the most simple Rule that I had been given the day before, Drop in second club length. Errr wrong 2 shot penalty.

I didn’t think it would be difficult to drop a golf ball, but today I managed to make a complete $€$%^#¥= arse of it. Basic Rules. #Nobhead

After bashing himself, Poulter had a little fun with the whole situation, offering his followers a chance to win some IJP Design gear and a signed Ryder Cup photo. The prizes will go to the funniest cartoon rendition of Poulter’s illegal drop.

Poulter has received some interesting submissions so far:

Although Poulter was looking for drawn submissions, his followers submitted some pretty funny photo cartoons.

He’s even allowing his buddy Lee Westwood to throw his drawing into the contest.

Of course you can slim. @WestwoodLee: @IanJamesPoulter can I enter a sketch?”

Poulter was not happy about his second-round 74 for several reasons, one of which was the fact that he has to wake up earlier than he’d like on Saturday.

The joys of being a helmet on a Friday means you have to set the early alarm for Saturday morning. #Hateitplonker. pic.twitter.com/X24hs4VMZZ

Related Link: Ian ‘Pingpong’ Poulter Is At It Again

Other Hot Links:
– The Fringe: Pros Go Bowling & Mean Adams Golf Comments
– Tripod: TPC Louisiana’s Most Famous Resident
– Troops Spice Things Up with Loudmouth Apparel
– Which Golfers are Earning the Most Money Per Round?
– 11 Best Mustaches In Golf