Inside The Ropes: Players Photos & Reactions From Royal Liverpool 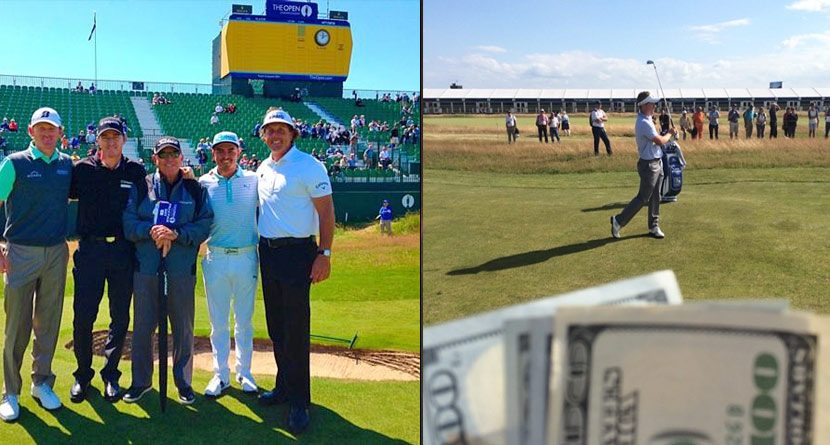 The 143rd Open Championship is underway at The Royal Liverpool. The first round has begun and some great golf is being played.  Here’s an inside-the-ropes look at all the players’ photos and reactions:

That was a really poor performance this week. Simply no excuses, body & wrist felt fine. Simply didn’t hit the shots nor the putts. End of..

The real @The_Open showed up today!Much tougher conditions & something that I would never forget.Holed out for eagle on the 2nd like in 2006

Pumped to make the cut @The_Open Batting 1.000 in majors for my career!!

Played nicely today and almost got it going…2 good shots to 18 and a good 4 makes dinner taste better! Need a good weekend. #TheOpen

Now that is what I call wrong side of the draw 🙁 need a good moving day tomorrow! #TheOpen

The difference between early/late and late/early times this week @The_Open is about 4 to 5 shots. Way the draw goes sometimes!

Wish I could have had this wave! #theflagshavestoppedmoving

Happy to have survived the bad end of the draw in my first British. Hopefully a few more putts will drop for me this weekend

Need the wind to keep blowing like this morning if I going to make this cut! @TheOpenJP #blowwindblow #+4

Foley making sure all good before teeing off this AM. #WindBattered http://t.co/eWdJz23m0S

Had a blast @The_Open spent a little too much time in the hay but gave it my best shot. Great course and great fans!!!

I tee off in the second round of The Open Championship at 14:49 with Matt Kuchar and Graeme McDowell. Full tee… http://t.co/gbFclk7cxj

Day 2 out here looking to be more challenging with the wind. Gotta be low and straight all day today

Strong breeze out there this morning…course will be playing tough. Might be a low ball flight day! #TheOpen

Really tough day today. Just spoke to the gentleman I hit on the 1st and happily he’s fine. Got him some tickets @The_Open this weekend.

Nice pre round chat with garyplayer. He said to stay patient. Good advice after an average opener today. http://t.co/hQGZDjUBnD

And the sun goes down on Thursday at the open. http://t.co/sZEzqp5yt0

Game #2 @The_Open tomorrow. 6:36 GMT off the box. Favorable exchange rate for @camptwinlakes this week! 100£ per birdie from @SilverStoneGrp

On this day in 2005, Jack Nicklaus played his last round of competitive golf, which fittingly took… http://t.co/gI1YbUW6ff

22 hrs of travel, 10 hrs of waiting & all I have to show for it is a #selfie #worthit RT @benbrowngolf: Me w Ben/Joel pic.twitter.com/Gs5YDnworw

I didn’t get in to @The_Open but don’t regret the trip. This is a special tournament. Didn’t want to miss the opportunity if presented.

Difficult to get a nicer day to play golf than today and if you manage to play well, even better!! Let’s keep it going!

I finished the first round of The Open Championship on 70 (-2) Full leaderboard: http://t.co/JqPJTeIFHx http://t.co/3XVFkAWIHO

Tough start but battled back well today. The golf course is immaculate. Need some proper links weather though!! #blowhard

The first round of my very first major falls on my anniversary. Going to be a great day. It has been an amazing four years with @amghadley!

Hey America, wake dat ass up this mornin, #TheOpen is on with all the pot bunkers and gorse and heather and what not...

Prep done and excited for the challenge @The_Open brings this week. Course is pure. Weather will play its part. Thanks for the support guys!

There are by far worse places to hang for a minute! #TheOpen pic.twitter.com/Cz03WfGLPG

So much to like about Hoylake and @The_Open atmosphere! Great layout and condition!! Hope the weather holds out... #OpenChampionship #GoDJ

All ready for a great week @The_Open love it!! Let's hope for some nice weather so we can all enjoy it! pic.twitter.com/Tn6N5zTHLR

Pic from back of the 18 green.. Martin having a good look at the green.. http://t.co/2hoNTKQ5vH

Great day ahead. @amghadley gets here in time for lunch. Afternoon nine with @bubbawatson and dinner to follow here at @The_Open

My favorite major is about to start! Playing the 1st two rounds with @LukeDonald & @RickieFowlerPGA. Should be great! Course looks amazing!!

Super excited to get in The Open! And as fate has it, I am playing with Sir Nick, so I will get to play & have drinks w/royalty!! #RBCHearn

The golf course is pure! Looking forward to a great week at #RoyalLiverpool #theOpenChampionship

Look at what I get to walk up to on 18 this week at the @TheOpenJP... #blessed pic.twitter.com/MpQP19Geo0

And I didn't even have to pay the twilight rate! pic.twitter.com/GG8wMo8i6y

At Hoylake W/ my coach Charlie, and caddie Victor. These guys are the best!! #TheOpen #Golf pic.twitter.com/QLKd6GaZhY