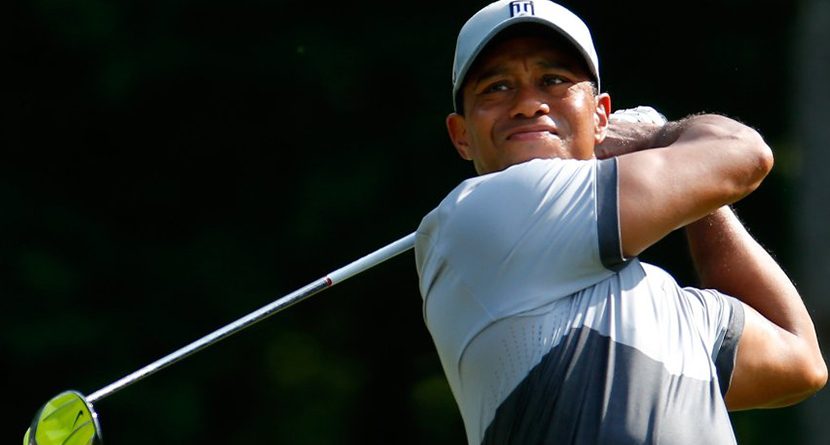 As if Woods dropping three consecutive wedges from 100 yards into the water in front of the green weren’t bad enough, The Washington Post’s Barry Svrluga caught up with Woods as he was leaving Congressional Country Club and got an interesting answer to his questions.

So where does this leave a golfing public who wants more definitive answers than Woods can — or cares to — deliver? This will be the 10th year of his event here, one that effectively saved PGA Tour golf in Washington. Walking to the Congressional parking lot later, I asked Woods whether he could envision, when his career is over, returning to Congressional — in the vein of Nicklaus at the Memorial or Arnold Palmer at Bay Hill — as host of the tournament that benefits his foundation, a ceremonial sideshow sitting in a comfy chair, telling stories and remembering better days gone by.

Really? How and why?

“Ask me that question later this year,” he said. “I’ll have a different answer.”

GolfChannel.com’s Ryan Lavner took Woods’ answers to mean retirement is closer than we may think.

Maybe he knows now that even if he’s healthy, he can’t keep pace with today’s best players – not least his mentee, world No. 1 Jason Day, with his mammoth drives, sky-high irons and silky putting stroke. Maybe Woods knows that he’s set up to fail, his recovery so harshly scrutinized that his three water balls landed on the cover of Tuesday’s USA Today.

It’s not hard to imagine any of those scenarios.

As usual with Woods, there are far more questions than answers. But read those ominous words again – Ask me that question later this year. I’ll have a different answer – and you get the sense that he already realizes how this latest comeback will end.