It’s Getting Hard To Not Hate Daniel Berger 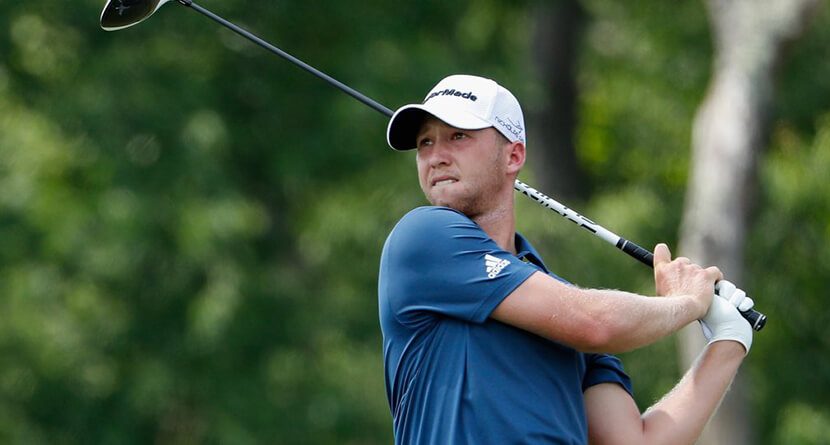 Daniel Berger racked up a couple more enemies on Thursday in Akron at the WGC-Bridgestone Invitational. The no-cut event has a purse of $9.5 million and only a field of 61 players, which means merely showing up and playing guarantees each player in the field a paycheck of at least $50,500.

All you have to do is hack it around a historic golf course for 72 holes and you cash a monster check. Good work if you can get it, right? Well, if you’re Daniel Berger, that’s a little too much to ask.

The FedEx St. Jude winner showed up to the tee for his 11:24 a.m. tee time, hit his opening tee shot and promptly withdrew. If he was going to just hit one shot, why even bother showing up? This is why.

Daniel Berger withdraws from WGC-Bridgestone with shoulder injury. Since he hit one tee shot, will earn $50,500 — equal to last-place cash.

Worse still? He smoked it 307 yards right down the fairway. And the sketchiest part of it all?

Clarification on Berger WD: if he would have withdrawn prior to start, his $ would’ve gone to charity. Bc he hit a shot, he gets the $50K.

In Berger’s defense, he earned the spot in the field and wasn’t stealing the spot from an alternate; it was his money to give up. Still, that’s pretty weak. If you want to see some real hate, check out his mentions on Twitter from the fantasy golf community. They are not happy at all.

You can add the $50k one swinger to the reasons to hate Daniel Berger, which includes forcing Phil Mickelson to make a one-foot putt in match play…

.@DanielBerger59 making a Hall of Famer putt a 1-footer on the second hole?

…and having a girlfriend that’s way out of his league.

Dinner at Coolinary Cafe with @torislater Best spot to eat in Jupiter hands down. Gotta try the chicken and waffles #imgettingfat

Brooks Koepka and Davis Love III also withdrew during the first round, meaning Berger picked up an additional $500 due to the tie increasing his share. We have a feeling that DB Strait Vibin is laughing all the way to the bank.

In truth, we’re probably more jealous of DB than we are haters.