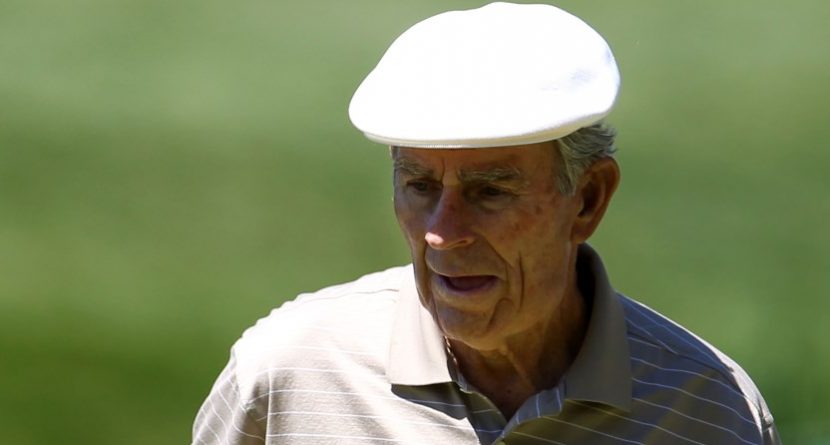 Jack Fleck captured only one major during a career that spanned more than 40 years, but his triumph at the 1955 U.S. Open remains one of the greatest upsets in the long and storied history of professional golf.

All signs pointed to the legendary Ben Hogan taking home the country’s national championship in ’55, but an unknown Fleck carded two birdies over his final four holes to force a playoff. So 18 holes were played the following day, and Fleck put up a 69 to Hogan’s 72.

Until Friday, he was the oldest living winner of the U.S. Open. But after battling a brief illness, Fleck passed away at the age of 92 in Fort Smith, Ark.

Fleck’s career included only two other victories on the PGA Tour, and a triumph at the 1979 Senior PGA Championship. Meanwhile, the career of the iconic Hogan comprised nine major titles and 64 all-time wins on the PGA Tour.

“It was like someone who had never won a tour tournament beating Tiger Woods today,” Fleck said about his major win in a 2002 interview with The Associated Press.

And it would have been like that unknown winning with clubs given to him by Woods. According to ESPN.com, the clubs Fleck used at that U.S. Open at Olympic Club in San Francisco were made by Hogan’s company. Printed on them was Hogan’s signature, they were given to Fleck with Hogan’s blessing, and the legend even introduced himself to Fleck before the tournament and gave him a pair of wedges. Little did Hogan know that those clubs would keep him from collecting a 10th major, in a tournament that was arguably his last best chance to do so.

But according to Fleck, Hogan never had a chance. While shaving Saturday morning before the 36 holes to be played that final day, Fleck was listening to a song called “I’ll Walk With God” by Mario Lanza when he heard something prophetic.

“I heard a voice that said, ‘You are going to win the Open,” Fleck said.

Fleck did in incredible fashion. And long beyond the day of his passing, he’ll be remembered for pulling off one of the greatest golf upsets ever.