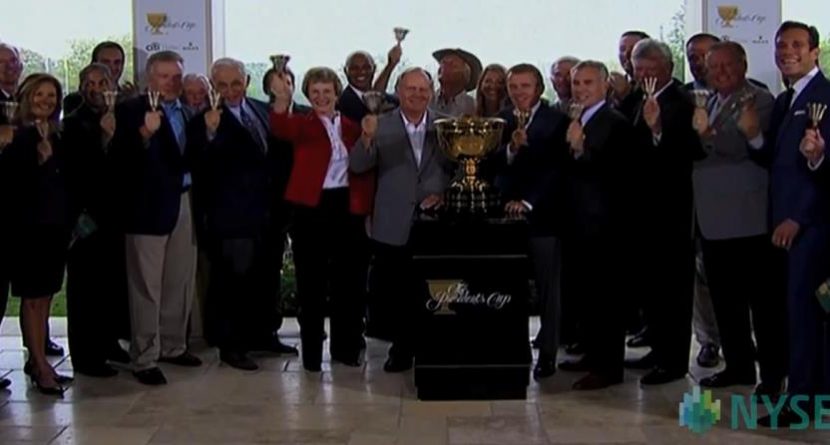 To get things rolling Thursday at the Presidents Cup, the legendary Jack Nicklaus remotely rang the New York Stock Exchange opening bell from the course he designed and built at Muirfield Village Golf Club, which is hosting the tournament in Dublin, Ohio. The 18-time major winner and four-time U.S. Presidents Cup team captain was joined in the ceremony by executives of Cardinal Health and PGA Tour Commissioner Tim Finchem.

To the best of our knowledge, Nicklaus is the first golfer to ring the bell remotely, but these five pros have had the individual honors of doing so on Wall Street.

Rory McIlroy: To kick off the Deutsche Bank Championship in August, the tournament’s defending champ rang the bell on the Monday before the FedExCup playoff event.

Phil Mickelson: Fresh off his victory at the Open Championship in July, Mickelson and his wife Amy were invited to ring the NYSE’s closing bell.

J.B. Holmes: Following brain surgery in 2011 to correct structural defects in the cerebellum, which is area that controls balance, Holmes rejoined the PGA Tour in 2012 and made it through three rounds of the FedExCup playoffs. In honor of his comeback season, he rang the opening bell in September 2012.

Ernie Els: The Big Easy earned the chance to ring the NYSE opening bell in August 2012, soon after winning that year’s Open Championship. Els was joined by his wife, Liezl, and Deutsche Bank CEO Seth Waugh.

Tiger Woods: Waugh joined Woods at the NYSE in 2007 to ring the opening bell days before Woods set out to defend his ’06 Deutsche Bank title.