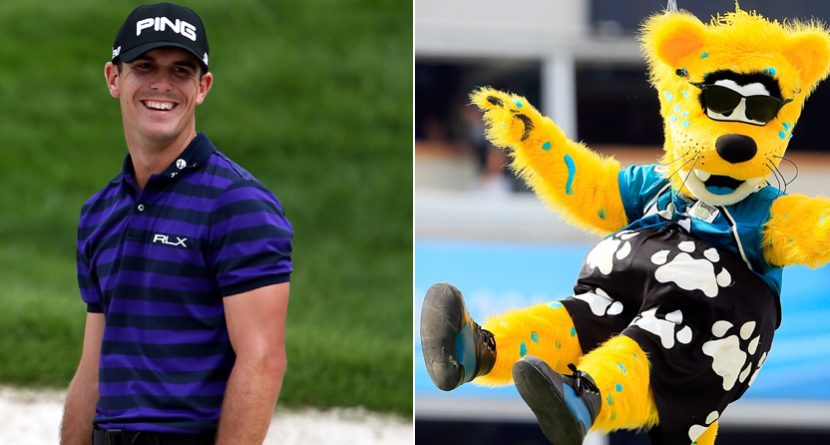 The Jacksonville Jaguars are 0-4. They’ve scored only 31 points – barely more than a touchdown per game – and given up 129. That 98-point differential is the worst in the NFL.

But they still have the best mascot in the league. And there are plenty of seats available at EverBank Field for Jags’ home games to watch the antics of Jaxson DeVille.

On Sunday, he did a backflip off the lights that tower above the stadium:

Last week, after losing a bet to Blitz the Seahawk, he danced in a thong:

He’s also quite the golfer, which is why at halftime of every Jags’ home game he competes in closest-to-the-pin contests with PGA Tour players. Billy Horschel was the cat’s opponent Sunday, but apparently the Jag didn’t put up much of a fight. Each contestant hit a 125-yard shot from the Sky Patio in the stadium’s south endzone to an island green at midfield. Jaxson chunked his attempt.

That means the Jaguars Foundation donated $10,000 to the charity of Horschel’s choice. If Jaxson had won, $1,000 would have been donated to Horschel’s charity and every fan at the game would have received a complimentary order of Papa John’s cheesesticks. Had either Horschel or Jaxson sank a hole-in-one, a previously-selected fan would have taken home $1 million.

Three weeks ago, Jaxson lost to David Lingmerth. The Jaguars are on the road for the next two weeks, so the mascot has until Oct. 20 to work on his game.

“@BillyHo_Golf: On way to the Jaguars game to challenge Jaxson to a closest to the pin contest!” #papajohns #cheesesticks 4 all when I win!

Not bad seats at the Jaguars game! View from the owners box! Thanks @PGATOUR and the Jaguars organization! pic.twitter.com/upV2kDOdjh

The view from where I’m hitting the golf shot at halftime! Just a tad winding up here! Hopefully I don’t shank it! pic.twitter.com/b3yiZdRAmH

“@Back9Network: @JaxsonDeVille @BillyHo_Golf who won the contest yesterday @jaguars game?” Billy won, I hit worst golf shot since I was 5!