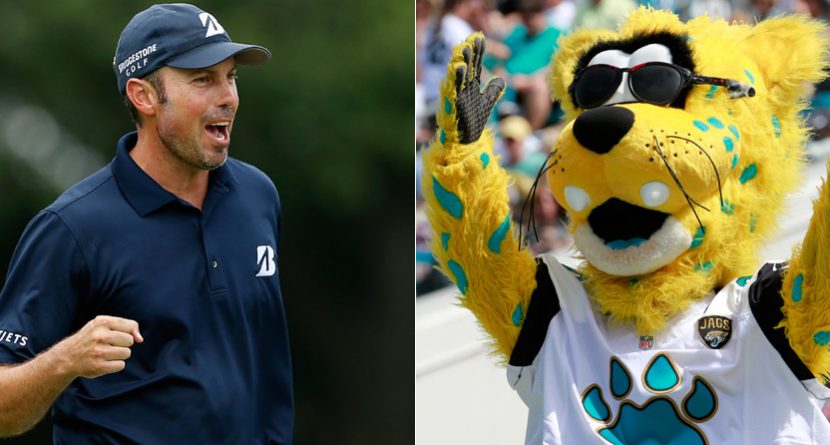 Jacksonville Jaguars mascot Jaxson DeVille was at it again on Sunday, taking on PGA Tour professionals in a closest-to-the pin contest at halftime. And he lost again.

The cat’s foe this week was Matt Kuchar, he of the $5.6 million earned last season and awesome Fresh Prince of Bel Air handshakes. After starting against David Lingmerth, then taking on Billy Horschel, Jaxson’s competition keeps getting tougher. And the charities for these golfers keep getting richer.

At each Jags home game, the mascot and a golfer each hit an 125-yard shot from the Sky Patio in EverBank Field’s south endzone to an island green at midfield (a nod to the famous 17th hole at nearby TPC Sawgrass). If the pro wins, the Jaguars Foundation donates $10,000 to a charity of that player’s choice. If Jaxson DeVille lands his shot closer than the pro’s, the Jaguars Foundation will give $1,000 to the player’s charity and every fan at the game gets a complimentary order of Papa John’s cheesesticks. And if either one sinks a hole-in-one, a fan selected prior to the game receives $1 million from the Jags.

Kuchar’s charity was the Ronald McDonald House Charities of Jacksonville. The organization supports the health and well-being of children by providing lodging and other services for critically ill, chronically ill and seriously injured children and their families.

The defeat drops Jaxson to 0-3, and the squad he ceaselessly supports later fell to 0-7. That means he’s probably about to pay up on some crazy bet he made with the San Diego Chargers mascot.

A week ago, Jaxson made good on his bet to Miles, the Denver Broncos mascot:

Ok @5280Miles congrats! Here’s half ur winnings. I’ll be presenting my check for #BCAM at this weeks game! #Jaguars pic.twitter.com/ACIUCS7OFJ

This is what he endured after a loss to the Indianapolis Colts:

And after the Jags fell to the Seattle Seahawks:

Might the world be a funnier place because Jacksonville keeps losing?