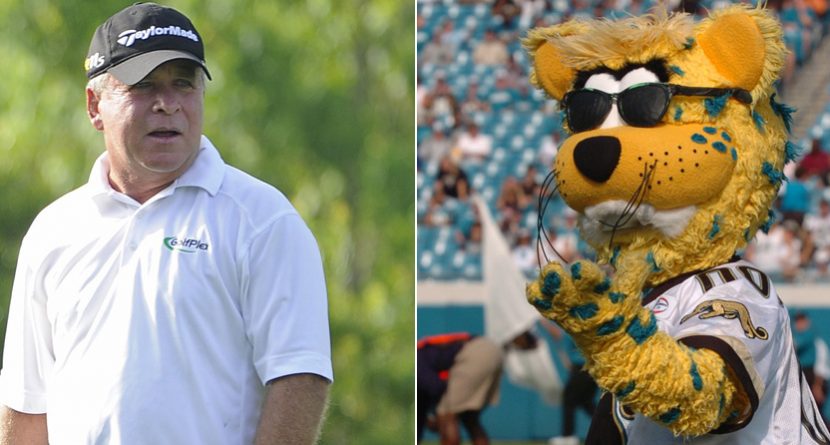 Lost in the hubbub about the revived “Tim Tebow to Jacksonville” movement was the fact that a win actually took place on Sunday at Jacksonville’s EverBank Field. Not by the football team, unfortunately, but by the mascot, Jaxson DeVille.

The big cat got his fourth crack at beating a PGA Tour pro in a closest-to-the-pin contest, and he finally chalked up a win. Jaxson defeated Mark McCumber, a 10-time winner on the PGA Tour who now competes on the Champions Tour.

As a result of Jaxson’s victory, every fan at the game received a free order of cheesesticks from Papa John’s if they took their ticket stub into a store.

If @JaxsonDeVille beats Jax native Mark McCumber at closest to the pin at halftime, all attendees of #AZvsJAX get @PapaJohns Cheesesticks.

“@JagsPromotions:Jaxson got closest to the pin today and Papa John’s is (cont) http://t.co/ezLrB6re7d” COLLECT YOUR WINNINGS FOLKS! See how

Hope everyone who wanted them got their free cheesy bread from @PapaJohns today. 3 games left means I got 3 more chances get you more!

The contest takes place during halftime of every Jaguars’ home game, of which there will be seven total this year (one of their games was moved to London on Oct. 27). Both the mascot and golfer hit a 125-yard shot from the Sky Patio in EverBank Field’s south endzone to an island green at midfield (a nod to the famous 17th hole at nearby TPC Sawgrass). If the pro wins, the Jaguars Foundation donates $10,000 to a charity of that player’s choice. If Jaxson DeVille lands his shot closer than the pro’s, the Jaguars Foundation will give $1,000 to the player’s charity and every fan at the game gets a complimentary order of Papa John’s cheesesticks. And if either one sinks a hole-in-one, a fan selected prior to the game receives $1 million from the Jags.

McCumber’s charity of choice was Second Harvest North Florida, which distributes food and grocery products to hungry people and educates the public about the causes and possible solutions to problems of domestic hunger.

In addition to free cheesesticks, fans can also show their ticket stub at the Hollywood Beach Golf Resort and receive a free round of golf if they book a one-night stay at the hotel. Hollywood Beach is home of the McCumber Golf Academy.

Jaxson will tee it up again Dec. 5, when Jacksonville faces the Houston Texans.

Related Links: Kuchar Defeats Jaxson | So Does Horschel | Lingmerth Too