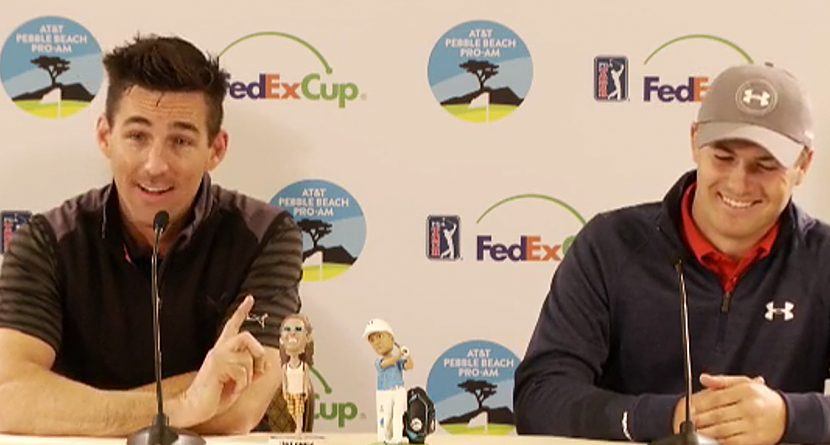 .@JakeOwen shared a few amazing stories about @JordanSpieth today. This had to be the best one. https://t.co/t8RmrLddeS

Look at that sheepish grin on Jordan Spieth’s face as Jake Owen’s telling that story. Like a kid whose mom is gushing about the 100 he just got on his spelling test to her friends. “Moooom, stop it.” Only instead of his mom, it’s country music superstar Jake Owen and instead of a spelling test, it’s holing out an iron shot from 98 yards in front of a thousand people after calling his shot.

Whatever the “it factor” is people talk about, Spieth’s got it in spades. Ever since he won the Masters last year, he’s gotten a little more Rory-esque in his press conferences: more confident, more talkative, more expansive. And it’s good to see that the choir boy guy he presents to the world has a little bit of a streak in him. “Pay up” while it’s in the air? Beautiful.

Oh, and in case you were wondering, the odds of a professional golfer hitting a hole-in-one are roughly 2,500-1. Apply that kind of logic to Spieth’s 98-yard shot from the fairway and you’re looking at somewhere near 2,000-1, give or take, and that doesn’t take into account the fact that he Babe Ruth’d it.