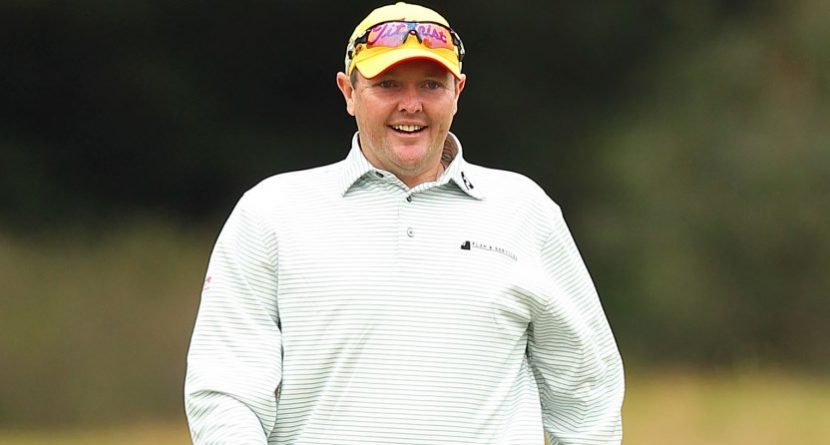 When Jarrod Lyle began his comeback from medical leave and returned to the U.S. in July, the two-time cancer survivor’s sights were set squarely on the first tournament of the 2014-15 PGA Tour season: the Frys.com Open. Yet, an invite to play the event never came.

No matter. Lyle showed up this past weekend at the Silverado Resort in Napa, Calif., anyway and took care of things himself. He entered the Monday qualifier, posted 6-under-par 66 – courtesy of zero bogeys – to get into an eight-man playoff for four spots, and then birdied the second hole to snag one of those berths.

So just as he planned, Lyle will tee it up Thursday in his first PGA Tour event since February 2012. Which is great because he’s already accepted a sponsor’s invite for next week’s Shriners Hospitals for Children Open in Las Vegas.

These tournaments will be the first of 20 that Lyle can play in trying to regain his PGA Tour card. He received a medical exemption in March 2012 upon learning that the acute myeloid leukemia he battled as a teenager had returned. In those 20 tournaments, Lyle needs to earn $283,825, which is the difference between the amount he had earned before leaving in 2012 ($363,685) and the amount earned by the 125th-ranked player that year.

To prepare for his PGA Tour comeback, the Aussie and his family moved back to the U.S. over the summer and were based in Orlando. He played four Web.com Tour events, tying for 11th at the Midwest Classic before missing the cut in his next three tournaments.

Lyle’s first professional start since his second bout with cancer was in November at the Australian Masters, where he surprised even himself by making the cut. He also played the Victorian Open in February, but missed the cut.