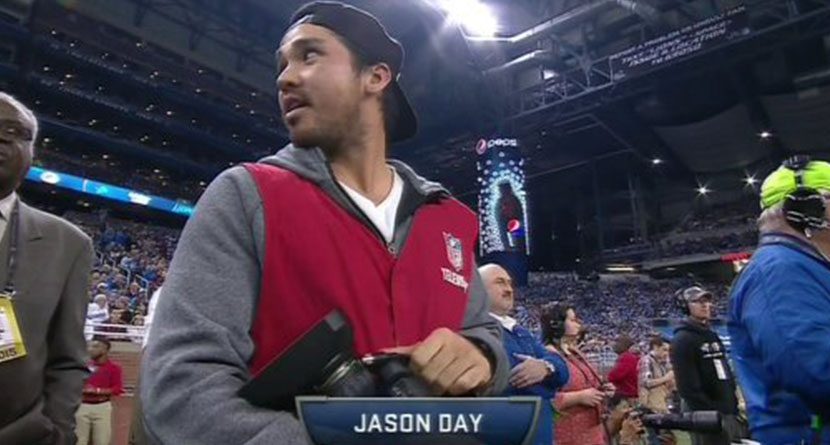 We haven’t seen Jason Day since the singles portion of the Presidents Cup in South Korea last month and for good reason — the PGA Champion has spent the last few weeks at home welcoming the newest member of his family, Lucy, to the world.

Day opted to call it a year after compiling a five-win 2015 that included his first major championship, so it was odd to see the current World No. 2 on the sidelines at the Detroit Lions vs. Green Bay Packers Thursday Night Football game. Day and his family split their time between Ohio and Arizona, so Detroit in December was an interesting audible.

Even more interesting was his attire: Day was sporting a red NFL-sanction photographer’s vest and was first spotted by CBS holding a camera. Later in the game, Day had ditched the camera, but still had a front-row seat to the Lions’ Calvin Johnson making a circus catch for a touchdown. One of his fellow red-vested cameraman caught his reaction, which was posted to Twitter by user @_MarcusD_ .

There’s been no word out of Day’s camp as to why he was on the sidelines on Thursday night, but there’s little chance after the career year he had in 2015 that he’s considering a change of profession.