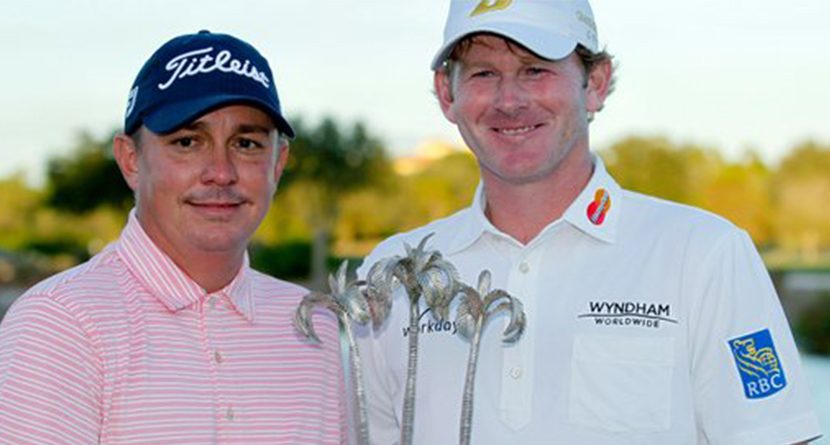 Jason Dufner and Brandt Snedeker took home the final PGA Tour trophy of 2015, winning the Franklin Templeton Shootout hosted by Greg Norman in Naples, Fla. on Saturday by two strokes over the team of Harris English and Matt Kuchar.

The end-of-the-year silly season event pairs 24 golfers on 12 teams to play in a three-day mixed-format event. On Thursday, the pairs play a scramble; on Friday, a modified alternate shot (both hit drives, pick one and play alternate shot in from there); and on Saturday, better ball. Dufner and Snedeker bookended their rounds with a pair of 11-under par efforts to finish at 30-under par for the tournament.

Although the win doesn’t come with the usual perks and accolades of a typical PGA Tour victory, it gives Dufner and Snedeker a nice payday — $325,000 each — and a good taste in their mouths heading into the PGA Tour’s end-of-the-year break.

For Snedeker, it caps a 2015 that saw him win the AT&T Pebble Beach National Pro-Am in February and string together four consecutive top-10s over the summer highlighted by a solo eighth place finish at the U.S. Open.

Dufner’s calendar year wraps up as an indifferent 2014-15 PGA Tour campaign. Although the 2013 PGA Champion made 17 of 21 cuts, he only managed a pair of top-10s, his best finish a tie for eighth at the AT&T Byron Nelson. In his most recent start at the RSM Classic on Sea Island last month, however, Dufner finshed in a tie for ninth place.