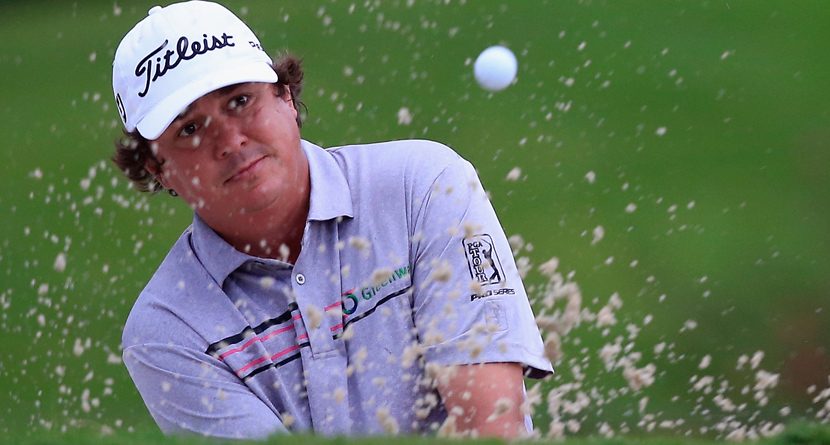 Jason Dufner is all about business when he sets foot on a golf course. So it’s only fitting that the 2013 PGA Champion is partnering with a cable channel that specializes in providing business and financial news around the clock.

Fox Business Network announced Tuesday that it will sponsor Dufner starting with the Masters at Augusta National this week. Dufner will wear the FBN logo on his shirt collar throughout the tournament, as the network hopes air time for Dufner at Augusta brings in some extra publicity. Financial terms of the deal were not disclosed, but FBN Senior Vice President of Programming and Operations Brian Jones said the channel hopes to have a relationship with the Duf Daddy for at least the next 12 months.

New partnership for @JasonDufner… Sporting the @FoxBusiness logo on his collar this week @The_Masters pic.twitter.com/iAIW3NQqOo

“Our viewers are champions of business and industry and they are interested in golf and tennis, and we saw a lot of correlation there, “ said Jones. “We wanted to have an ongoing relationship with someone who is seen as an up and coming player.”

FBN becomes the fifth corporate sponsor for Dufner, joining Perry Ellis, Titliest, FootJoy and Greenway Medical. As the season carries on, Jones said FBN will try to work Dufner in for personal appearances on the network and its social media channels.

Dufner took to Twitter in expressing his gratitude about the new sponsorship with the 21st Century Fox-owned outlet.

Excited about my new partnership with @FoxBusiness, couldn’t think of a better time to start a new relationship then during #Masters2014 Dufner will be taking part in his fourth Masters Tournament this week and looking to build on his T-20 finish from a year ago.