Jason Dufner Wins In Playoff At The CareerBuilder Challenge 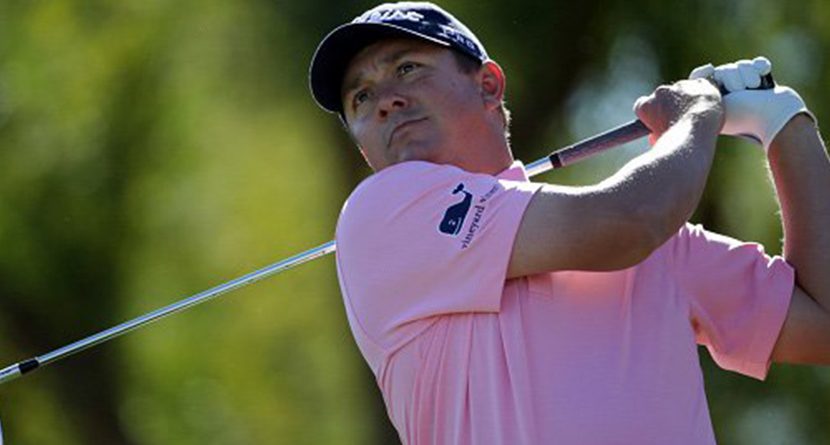 Another week, another playoff, another multiple-time winner on the PGA Tour. Jason Dufner outlasted David Lingmerth in a two-hole sudden-death playoff to capture his fourth PGA Tour victory at the CareerBuilder Challenge in partnership with the Clinton Foundation. It was his first solo victory since his 2013 PGA Championship win at Oak Hill.

Dufner entered the final round with a two-shot advantage over Jamie Lovemark. In line with his on-course demeanor, Dufner played an even-keeled front nine that included eight birdies and one bogey. Dropping a shot to a field in need of birdies, Dufner briefly shared the lead with Lovemark, Lingmerth and Hadwin around the middle of the round.

But as the final groups turned towards the clubhouse, Dufner strung together three consecutive birdies to pull ahead.

Jason Dufner regains a share of the lead with two to play. pic.twitter.com/RUAQoqxY7O

The birdie streak grinded to a halt on the 13th hole with a bogey and before he could get to the green on the par-5 16th, Dufner was down a stroke to Lingmerth, who played the first seven holes of the back nine in four-under par.

Dufner matched Lingmerth’s birdie on the par-5. Meanwhile, Hadwin and Lovemark had excused themselves from the festivities — Lovemark via a trio of double bogies over the course of seven holes and Hadwin bogeyed three out of four holes during the middle of the back nine.

Playing the final round on the TPC Stadium Course, by far the toughest of the three that hosted the Palm Springs event, meant dealing with Pete Dye’s other famous island green, also the 17th hole. Ahead, Lingmerth acquited himself nicely, hitting to the middle of the green, 35 feet away and two-putting for par. Dufner had a more interesting route for his three.

Escaping the island green with a miraculous par, Dufner seemed to have fate on his side, but couldn’t find the bottom of the cup with his 19-foot birdie try on the last hole.

On the first playoff hole, Lingmerth split the fairway while Dufner found a deep fairway bunker, which forced him to lay up. With the advantage, Lingmerth hit a solid approach shot to inside of 20 feet for the win.

Lingmerth for the win… Low. pic.twitter.com/K7HgwdH8fT

Tapping in for par, Dufner still had outside of 10-feet to extend the playoff.

Identical drives missing the fairway right on the third time through 18, Lingmerth pulled his approach into the lake guarding the left side of the putting surface. Dufner played safely to the front half of the 18th green and left himself five feet for the win.

Jason Dufner is back in the PGA TOUR winner’s circle. #QuickHits https://t.co/kmuRrWjClN

Aside from the obvious relief of getting back in the winner’s circle, Dufner moves up to No. 60 in the Official World Golf Rankings, just outside of the coveted top-50 that holds the key to a myriad of exemptions. Still cashing in on some of his PGA Championship exemptions, Dufner has another accomplishment to hang his hat on and some momentum moving into the meat of the PGA Tour season.

“To get an early win kind of motivates me even more” – Dufner on his ‘big’ win: https://t.co/Chghphp2EF pic.twitter.com/WYt6X6QY2w