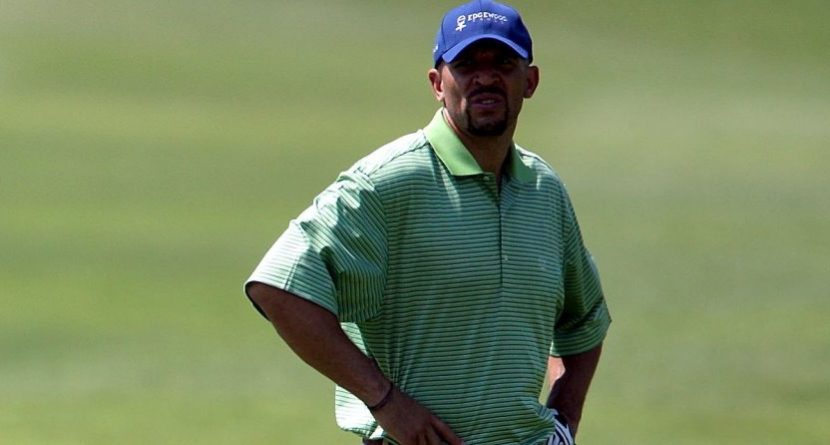 Henrik Stenson is the 10th-ranked golfer in the world. Unfortunately, his rise to that spot from 53rd at the beginning of the year has done little to increase his popularity in New Jersey.

Then again, Tiger Woods might be about the only golfer who would be more popular among fans at Liberty National if he was playing with Jason Kidd, the Brooklyn Nets’ new coach. Kidd starred for the Nets when the team was still in Jersey, then landed back with the franchise after retiring earlier this summer.

Stenson was joined by the now former NBA and Olympic star in Wednesday’s pro-am event at Liberty National ahead of The Barclays, which kicks off the FedExCup playoffs Thursday. Many fans turned out to see Woods, but the world No. 1 only played nine holes because he felt stiffness in his neck and back. Apparently, he slept on a soft hotel bed. Seriously.

But the crowds were just as thrilled to see Kidd, who signed autographs, posed for pictures and chatted with fans. Though the Nets bolted for Brooklyn, New Jersey still sides with them over the New York Knicks. And Kidd’s still a fan favorite even though he played for those hated Knicks last year.

Kidd wasn’t out there just hacking away, either. He said he hasn’t had much time to work on his golf game since taking over the Nets, but he at one time boasted a 6 handicap. Maybe he’ll improve on that with some help from Stenson?

Thanks @henrikstenson for showing us how to play golf the right way. pic.twitter.com/nB9DgJrhzO