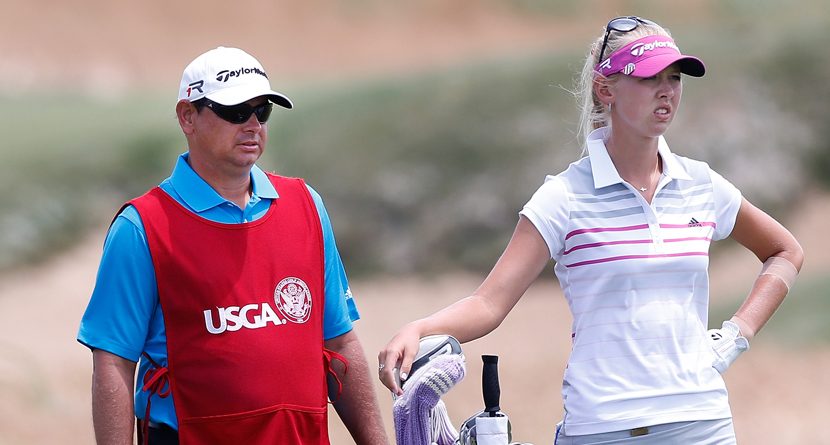 Have you heard of Jessica Korda?

She’s a 20-year-old golfer on the LPGA Tour. She has one win as a professional, the 2012 Women’s Australian Open. This season, her best finish is a T2 at the Mobile Bay LPGA Classic in May. She’s got four other top-10 results, including a T7 at the U.S. Women’s Open over the weekend.

And that’s where her story takes an interesting twist.

During her third round at Sebonack Golf Club, Korda fired her caddie, Jason Gilroyed. Just like that.

First Gilroyed had a job. And then he was out on the street.

We wonder if he spent his Monday morning waiting in an unemployment line.

Fortunately for Korda, she had a backup plan in the form of her boyfriend and Back9 Ambassador Johnny DelPrete. He plays on the Web.com Tour and was following his lady during her weekend on Long Island. “Had a couple of disagreements here and there, and I wasn’t in the right state of mind,” Korda said in an ESPNW story. “I knew I needed to switch and just have a little bit more fun out there.

“It was tough for me, because I care about Jason a lot; he’s a great guy. I’m not that type of person to take these things really easily. For me it was very hard to tell him that, and it took a lot for me.”

Then she asked — no, more like ordered — DelPrete to fill in.

“I just told him, ‘Johnny, grab the bag, let’s go,'” Korda said. “The first few holes I was very shaky. But my boyfriend/caddie kept me very calm out there and kept it very light. And it was kind of funny seeing him fumble over yardage.”

We reached out to DelPrete about the situation and he had this to say:

“Jessica did what she felt was in the best interest of her game, and I was glad I was able to help her out. My only goal out there was to just keep her calm, relaxed and made sure she had fun. I’ve caddied growing up, and I play, so getting numbers and doing the caddie work wasn’t a worry. She’s extremely talented, and I felt if I kept her calm and relaxed, she’ll take care of the rest.”

We’re not exactly sure how many years Gilroyed has been a caddie, but it’s safe to say he’s been out there longer than Korda has been on the Tour (since 2011). The guy clearly knows how to do his job and has earned his spot to be on the circuit.

One Yahoo! Sports blogger, who used to caddie on the LPGA Tour, knew of Gilroyed when he was working for Cristie Kerr — who was known to let her emotions run high when things didn’t go well.

“I spent time around Jason and can tell you he’s not only a great caddie but a solid dude, so who knows what happened between the two,” writes Shane Bacon.

LPGA legend Annika Sorenstam, who was working for NBC during the broadcast, seemed surprised by Korda’s decision.

“I’m giggling a little bit,” she said. “It’s funny, some of these young players. They always say it’s never the player’s fault, and maybe she took that a little too seriously.”