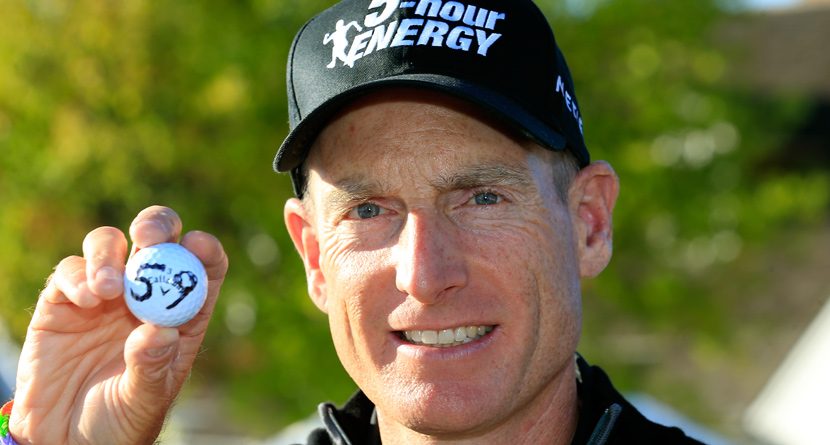 With maybe the most nerve-wracking three-foot putt of his career, Jim Furyk sank a birdie on 18 at the BMW Championship on Friday to card a record-low 59. He joins just five other gentlemen with 59s on the PGA Tour.

Furyk dropped three more strokes at Nos. 2-4, then carded his only bogey of the day at No. 5. That dropped him to 9-under overall – he started the round 1-over after a 72 on Thursday – but he responded with two more birdies at Nos. 7 and 9.

Knowing he needed to stick his 103-yard approach shot on the final hole to have a chance at 59, Furyk stopped it three feet, three inches from the cup. He made the clinching putt look easy.

With that, Furyk hopped on a list with these other men to have gone under 60:

Stuart Appleby – He won the 2010 Greenbrier Classic by one stroke with a 59 in the final round, sinking an 11-foot birdie putt on 18.

Paul Goydos – Earlier in July 2010, Goydos carded a 59 in the first round of the John Deere Classic. He sank 12 birdies that day, including a 7-footer on 18, but he finished runner-up to Steve Stricker on Sunday.

David Duval – The only other final-round 59 was Duval’s at the 1999 Bob Hope Chrysler Classic. An eagle and 11 birdies helped him defeat Steve Pate by one stroke.

Chip Beck – He carded his 59 in the third round of the 1991 Las Vegas Invitational after starting, like Furyk, on the back nine. Beck sank 13 birdies, including his last three holes, but couldn’t win the tournament the next day. He tied for third.

Al Geiberger – The very first PGA Tour 59 came off the clubs of Geiberger in the 1977 Memphis Classic, where an eagle and 11 birdies in the second round helped propel him to victory. He also began his round on the back nine, and he dropped an 8-footer on the final hole to ink his name in the history books.

Related Links: A Look at Some of Golf’s Greatest Records