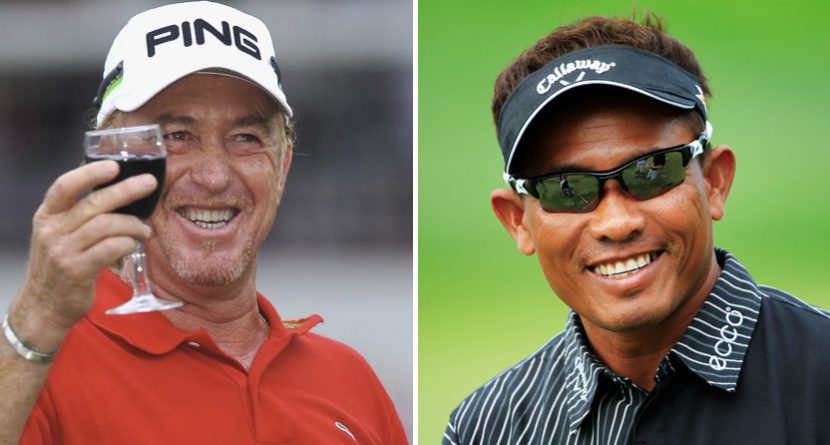 The inaugural EurAsia Cup officially has its captains. The new match-play event which was added to the 2014 European Tour will be contested between the Europe and Asia with Miguel Angel Jimenez and Thongchai Jaidee as their respective captains.

While European captain Miguel Angel Jimenez is no stranger to the format, it will be a new experience for Asian captain Jaidee.

“I am honored and delighted to be asked to captain Team Asia,” he said. “I am a huge fan of The Ryder Cup, but being Asian, I will never get to play in it.”

Jaidee is a legend in Asia, having won the Asian Tour Order of Merit three times and amassing 16 wins as a professional. Despite not having had the match play experience, Jaidee’s resume speaks for itself and that, along with his status on the European Tour, makes him the obvious choice for the captaincy.

European captain and Ryder Cup stalwart Miguel Angel Jimenez was chosen for obvious reasons. “The Mechanic” has piled up 19 career victories as a pro, including six in Asia. Most recently Jimenez captured the Honk Kong Open in 2012.

Jimenez said, “We have Europe playing the USA at The Ryder Cup, and it is great to now have a fully sanctioned, official competition for the Europeans to play against the best from Asia.  With so many world-class players now emerging from the Asian Tour, it is sure to be a close contest.” Along with their impressive golf resumes, Jaidee and Jimenez are two of the most popular, convivial players in the world. Jaidee is a former Thai paratrooper who didn’t begin playing golf until the age of 16 and didn’t turn pro until he was 30. Since then he has been the face of Asian, and more importantly, Thai golf around the world. In 2006 he became the first Thai born player to compete in all four Major championships.

Jimenez is the charismatic everyman who is beloved by most anyone who follows professional golf on any continent.  Recently, his decidedly unique stretching routine went viral around the golfing community after it was captured on tape at the British Open. His love for fast cars, fine wine and cigars has endeared him to all kinds of fans all over the globe.

The EurAsia Cup presented by DRB-HICOM will be held at the Glenmarie Golf and Country Club in Kuala Lumpur from March 27 to 29, 2014.