John Daly, David Duval Back to Q-School Thanks to Flawed System 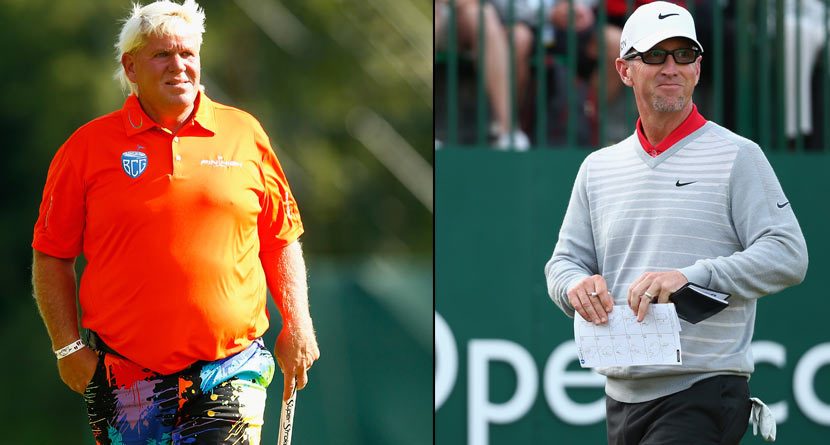 Despite being major champions and two of the most notable names on the PGA Tour in the last 20 years, John Daly and David Duval will be heading back to Q-School Dec. 11-16.

“It’s a hard cut,” said Tom Alter, PGA Tour spokesman, regarding the FedExCup points 200th-place cut-off to get into the Web.com Tour Finals.

Those players outside the top 200 in FedExCup points are forced to try again at Web.com Tour Q-School. David Duval (202) and John Daly (209) fall among the guys who will just miss out. Duval is the 2001 Open Champion and a former world No. 1, and Daly is a two-time major champion and one of the game’s favorite characters.

Some say the system that is sending Daly and Duval “back to the minors,” so to speak, is broken. Guys like Martin Laird, Darren Clarke and Ken Duke are already guaranteed a spot on the PGA Tour in 2015 thanks to wins in 2013 or, in Clarke’s case, his Open Championship victory in 2011. These guys finished between 126-200 and can’t improve their standing by taking part in the Web.com Finals.

Protocol on tour for most events is to keep going down the alternate list until the field is full. Why not do that for the Web.com Finals? When the likes of Laird (’13 Valero Texas Open), Clarke, Duke (’13 Travelers), Derek Ernst (’13 Wells Fargo), John Merrick (’13 Northern Trust), Woody Austin (’13 Sanderson Farms), Brian Gay (’13 Humana), D.A. Points (’13 Shell Houston), Davis Love III (lifetime exemption), Bernhard Langer and Kenny Perry (Champions Tour regulars) decide not to play in the Web.com Tour Finals, why not bump up the next 11 guys on the FedExCup points list into the tournament?

In case you’re wondering, those 11 spots would include Duval and Daly. Unfortunately — like many of the rules of golf — the system currently in place is kind of flawed. Imagine the publicity of having those names playing in those tournaments. Events that will otherwise be relegated to live-to-tape airings on Golf Channel would actually have people watching them.

But what do I know? I’m just a fan. Whatever happens, I’ll be rooting for Daly and Duval until the end.

Related Link: 2014 Will Be Make-or-Break for David Duval