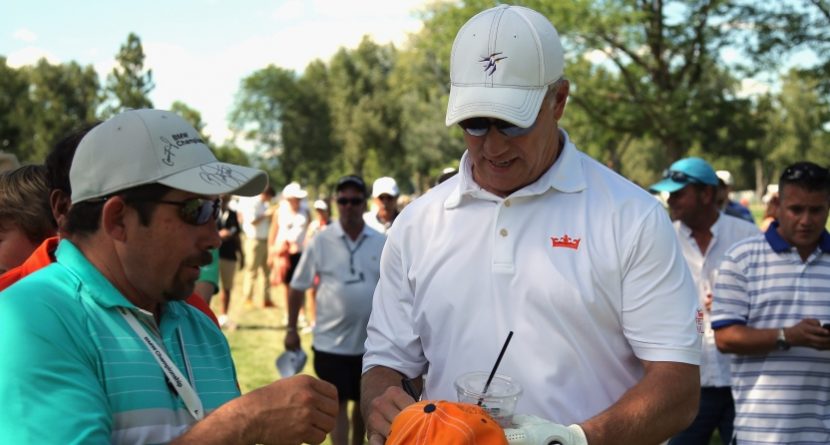 The pro-am tournaments that take place prior to PGA Tour events are typically practice rounds for the pros, and the highlight of the year for the amateurs. Fans in attendance scramble to get close to the pros to ask for autographs or pictures, while the amateurs playing alongside are all but ignored.

That was the case Wednesday at Cherry Hills for the BMW Championship pro-am – with one very noticeable exception.

The group showcasing Russell Knox, ranked No. 40 in the FedExCup standings, featured the largest galleries of the afternoon. Yet you can be sure just about no one was following Knox.

The foursome was actually highlighted by John Elway, the two-time Super Bowl winning quarterback of the Denver Broncos, who now serves as the team’s general manager. The group was often held up because Elway was signing autographs. Chants of “Super Bowl Broncos” were heard as Elway approached a green. One woman declared her life was “complete” after she secured a golf ball Elway tossed into the crowd.

John Lynch was also in the group. He’s another former Bronco who still resides in the area and, like Elway, is a member at Cherry Hills. Lynch now works as a TV analyst for FOX.

And the third member of the group was Cooper Manning, the older brother to beloved Broncos quarterback Peyton and New York Giants QB Eli. Many fans were more familiar with Manning than Knox, and the former isn’t even an athlete.

But Knox may benefit the most from his fortunate pairing. Elway is a board member at Cherry Hills and has played the course hundreds of times. On the fourth hole, a 439-yard par 4, Elway hooked his tee shot well left of the fairway. He immediately said, not jokingly, “That’s going to be all right though.” He knew what he was talking about, as all that was left for him was about a 50-yard chip to the green. Knox took notes.

Yet course knowledge isn’t all that Knox hopes to receive from Elway. The golfer may be from Scotland, but he’s been in the U.S. long enough to know who his playing partners were, Elway in particular.

“I’ve got my wife here, and we’ve already looked into getting tickets for Sunday’s game,” Knox told the Denver Post about the football game Rory McIlroy, Phil Mickelson and Bubba Watson will be attending. “We’d like to go. This will only help things.”

As for how Knox – instead of a more prominent player like McIlroy, Mickelson or Watson, or even Denver native Kevin Stadler – got thrown into the pro-am’s most high-profile group, Knox said, “I don’t really know why I got to play with them. Normally the big dogs get to play with the big dogs, but I’m really delighted.”

Plenty of fans were delighted to get time with Elway as well:

Thank you @johnelway for taking a picture with me and my coworker! You are awesome 🙂 pic.twitter.com/eamJ9fPXi6