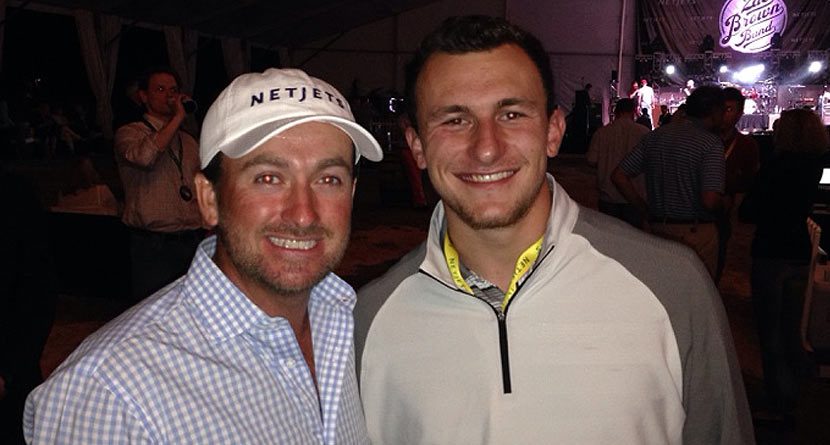 Johnny Football is back at it.  With less than one month until the NFL Draft, Johnny Manziel is making the most of his time before one of the biggest days of his life.  His latest stop was Augusta National.

After the second round of the Masters, Manziel made an appearance at the NetJets party, hanging out with Graeme McDowell.  GMac posted a photo with the former Texas A&M quarterback, asking his ‘tweeps’ which team they thought Manziel will go to this May.

Hanging with Johnny Football at the @NetJets party. Nice guy. Likes his golf. Which team will he go to? #manziel http://t.co/X88tjGjZXv

Manziel is avid golf fan, posting photos on Instagram of his custom Scotty Cameron putter and shots of him hitting the links with his family.  Johnny was fortunate enough to make it to Augusta this year, taking his dad “on a bucket list trip.”

Johnny Football expressed his disappointment that fellow Nike athlete Tiger Woods wouldn’t be at Augusta this year, but made the trip, nonetheless.

The NFL Draft will be held from May 8-10 at Radio City Music Hall this year.  Manziel is projected to be taken in the first round, so he shouldn’t wait too long to hear his name called.