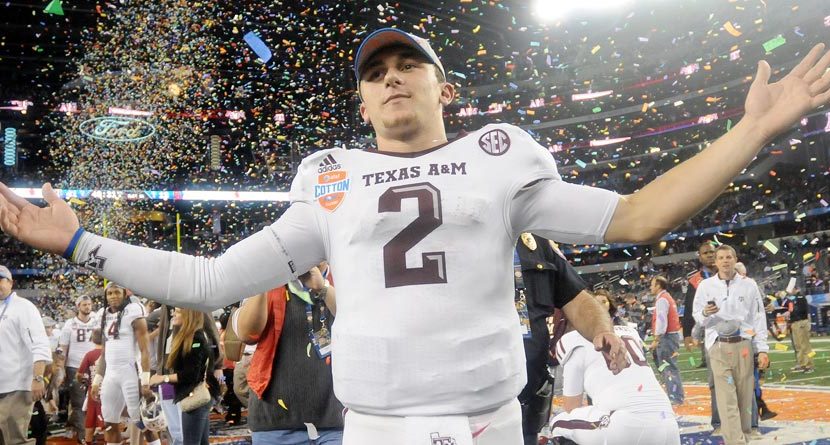 Johnny Manziel is one of the most talked about athletes on the planet, and it’s been that way since he took home the Heisman trophy as a redshirt freshman in 2012. Two years later, Johnny Football has something in common with Tiger Woods and Rory McIlroy – an endorsement with Nike.

According to ESPN’s Darren Rovell, Manziel has signed a multiyear endorsement deal with the biggest sports apparel company in the world. Manziel not only joins the likes of Tiger, Rory and Nick Watney as fellow Nike athletes, but he may be able to hold his own against them on the course.

Johnny Golf? Manziel smooth swing on the range. Does it translate to the course? http://t.co/daylrgyp

Manziel has shown off his impressive golf game to the world, posting photos of his scorecards on Instagram and Twitter. One of the cards featured a one-over 73, while another shows he shot a 78.

Johnny Football, being the superstar that he is, got a chance to play Pebble Beach with his family. He birdied the 18th hole to shoot 79, only losing to his dad by three shots. Maybe he can’t quite compete with the pros yet, but 79 at Pebble sure is impressive…especially after dishing out nearly $500 for the round.

Birdied 18 to shoot 79 at Pebble Beach and only lost to pops by 3 #progress #FamilyDay pic.twitter.com/Womm4vykEI

While at Texas A&M, Manziel played in a golf outing with fellow Aggie, Luke Joeckel and both of their fathers. Johnny stuck an approach to five-feet on the final hole and made birdie and tie the match. Clearly his clutch gene carries over from the football field to the golf course.

Manziel has seemingly been working hard to improve his game lately, posting a photo of himself chipping balls onto a makeshift floating green. He could be practicing to take on Tiger one day, especially after he was snubbed by Woods as a kid. Apparently, Johnny was supposed to meet Tiger for an autograph at a country club in Florida, but Woods never showed up.

Johnny doesn’t seem to hold a grudge against him, though. He listed Tiger as one of the three people he’d like to “party” with, alongside Charlie Sheen and Rob Gronkowski.

Now “teammates” with Nike, maybe we’ll see Johnny and Tiger united on the golf course in the future.

One of the greatest days I’ve had in a long time. Kid has been through so much..stay strong @CharlieDina #LoveYou pic.twitter.com/mkYNjZ9ByY