Jordan Spieth Back to No. 1 in the World, Phil Mickelson Falls Outside Top-25 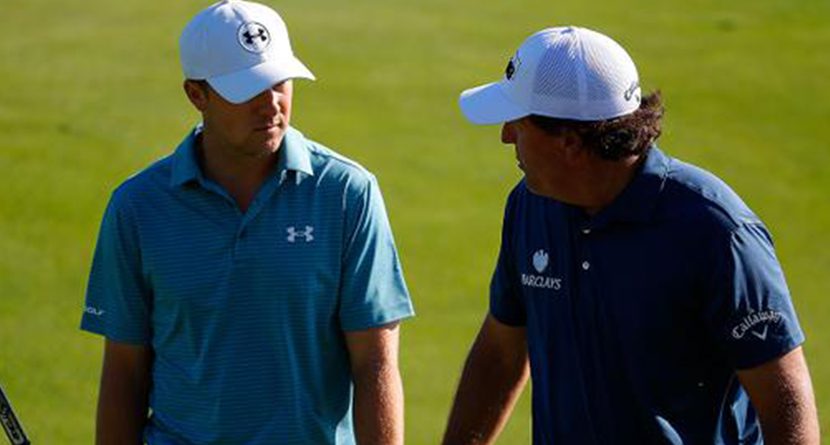 Another week, another change atop the Official World Golf Rankings. This time, Jordan Spieth will regain the top spot, supplanting Jason Day for the second time. The OWGR will be updated following the conclusion of the Sanderson Farms Championship, which was forced into a Monday finish by weather. Day held the No. 1 ranking for the previous three weeks.

Spieth first reached the top of the mountain in August, only to have the distinction bounce between Rory McIlroy, Day and himself for the past few months. As the different members of  the triumvirate pop up around the globe over the last few weeks of 2015, the ranking will follow. “It was certainly a goal coming into this week,” Speith said after posting a top-10 at the WGC-HSBC Champions. “I didn’t know what it was going to take, but I knew if I had a good week, it would be an improvement on a couple years ago. I knew I could go somewhere with it.

“Everyone is pushing each other a little bit, and when that No. 1 ranking slips away, it leaves some unrest in you and you really want to get back at it. I think it’s going to be really good for us and for golf.”

Spieth’s stay at the top, however fleeting, will be his fourth as World No. 1 and will mark his seventh week holding the honor in total.

Further down the table, Phil Mickelson will drop from No. 25 to No. 27, marking the first time Lefty has been ranked outside the top-25 since 1995. Mickelson’s fall down the rankings has been slow, but steady since his jump to 9th following his runner-up finish at the PGA Championship last year at Valhalla. Not that the ranking precipitated the split from former swing coach Butch Harmon, but the tumble outside of the top-25 can be seen as proof of Mickelson’s lack of results over the past year. The end of the era also highlights a rare bit of consistency that is not commonplace in discussions centered around the 45 year old.

Mickelson has never reached No. 1 in the world, although his 270 weeks ranked No. 2 is a record that likely won’t be broken.