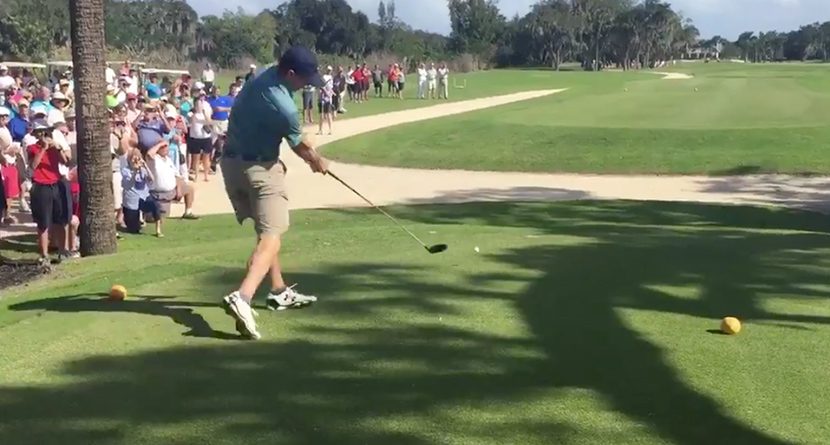 Perhaps inspired by John Peterson’s Happy Gilmore impersonation on the first tee during the CIMB Classic earlier this fall, Jordan Spieth tried his hand at the running-start swing made famous by the 1996 Adam Sandler movie on the first tee of the Grapefruit Pro-Am at Vero Beach Country Club on Sunday.

Spieth made the trip to Vero Beach as a return favor to country singer Jake Owen who played alongside Spieth and took the video of the swing. Owen has played Spieth’s foundation’s charitable event free of charge for the past two years, Golfweek.com reported, and Spieth came to the Grapefruit as a return payment.

“I’ve lived here my whole life, and I’ve never seen this many people, ever, walk a golf course, especially here at Vero Beach Country Club,” Owen said. “For them to see him play is a huge deal. And it’s a huge deal to me that he took time out of his obviously busy schedule to do this.”

The singer was also able to auction off a putting lesson from Spieth for $10,000 earlier in the weekend to benefit his foundation, which helps youths in the Vero Beach area.

As the video made the rounds, it caught the attention of Peterson who tweeted to Spieth to try the swing in competition.

Do it in pants, scrub. https://t.co/fTx2fPAXON

For posterity’s sake, here’s the Peterson doing his best Gilmore.

Let it be known if you Gilmore it off the first on Sunday you shoot 6 under. @drewsteckel pic.twitter.com/eFjaVxWdVe

Spieth said following this past weekend’s festivities that he’s going to enjoy a few weeks of downtime over the holidays before ramping back up in 2016. He will begin his year at the Hyundai Tournament of Champions in January on Maui.