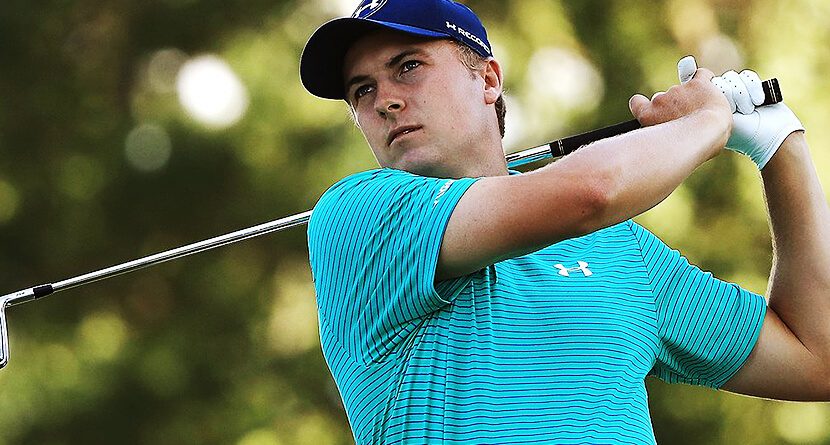 After stumbling to close his third round by making a triple-bogey 8 on the par-5 16th hole, Spieth reiterated his stance that he believed the 667-yard monster was a better hole with the tees up 50 yards. Golf Channel pulled a quote that Spieth felt made him seem like he was whining.

@GolfChannel shocker y’all turn a negative out of a very positive post round response. I owned the ☃, said I hit a bad shot. When pressed..

@GolfChannel I said it’s a better hole from 50yds up (which all players agree). Also said this waaaaaaay before today. God forbid honesty..

Spieth did his best to clear up his reasoning for lashing out on social media following his Sunday 67 that earned him a share of third place.

“I felt like yesterday even on the 8, I was kind of shocked at where the ball came down, and before I hit the next shot I had already laughed at whatever, I was already smiling. I thought I was really positive afterwards about the whole scenario,” Spieth said.

“And in my feed, I follow a lot of obviously golf things, so I’m a fan of golf. I don’t search it out for me. But when a headline reads kind of makes triple bogey and blames the hole, I’m like, I don’t think that was fair because I talked about that hole last year, the year before, and a video of it Wednesday. I was not blaming the hole after I made an 8. I had already previously said that, and I just happened to just mis-hit a shot.

“I certainly don’t ever want to go down as a whiner or complainer or anything because we live the life. We truly are very, very lucky to do what we do, and I don’t take that for granted and I don’t ever want to go down as high maintenance or complaining about any situation, but at the same time, you guys want honesty, and I’ll tell you what every single player says is that’s a much better hole from 50 yards up.

“So I was just a little frustrated with that being out and kind of maybe giving off as me complaining because I didn’t perform on that hole. But all in all, I shouldn’t really get involved in social media. It doesn’t do anything for me. But again, it’s rare.”

Spieth’s honestly is a breath of fresh air and his penchant for calling out trolls and clickbait headlines is something we can all get behind.