Jordan Spieth Forces Rules Officials To Have A Spit Take 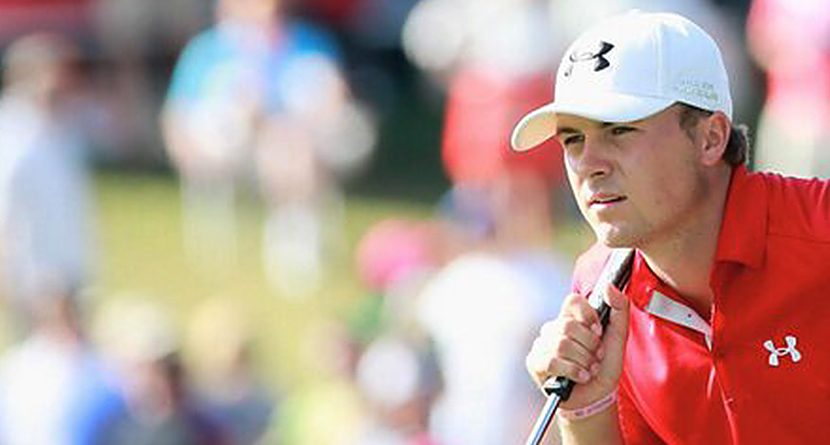 Jordan Spieth didn’t have a joke to tell the rules official he summoned on the third hole of the WGC-Cadillac Championship on Saturday, but he forced the referee to have a spit take.

Spieth’s trusty rusty Scotty Cameron by Titleist SC-009 prototype putter has been in his bag since he was 15 years old. And even though that was just seven years ago, the putter has its share of wear and tear, including a smoothed bottom of the flatstick.

The smooth finish has begun to cause problems for Spieth in certain conditions, such as the ones he found on the greens at Trump National Doral in the third round. Spieth told reporters following his 1-over par 73 that on the “shiny” greens his putter tends to slip on the surface. When it does, he likes to wet the bottom of the blade, either via damp towel or simply rubbing his saliva-coated thumb on the bottom to create traction.

Although he had never resorted to wetting the bottom of the putter in competition, Spieth wanted to know if he could do so legally under the Rules of Golf. This is what he found out, via GolfChannel.com:

“I’ve spoken to commentators, players and nobody knew the answer if you can do it,” he said. “I didn’t know if it was legal so I’ve never done it on the golf course [during a tournament round], so I asked an official once I knew the course was like that [on Saturday].”

Spieth approached a rules official on the third hole at Doral with the question, “He asked me what my intentions were and I told him to make it easier to set the putter down,” he said.

After a review of the question by the rules staff, the answer came back to Spieth on the eighth hole.

“It was a split on the decision,” he said. “So they called the [U.S. Golf Association] and he said that the USGA was going to talk about it further but for now we’re going to rule that you cannot do it.”

Tour vice president of rules and competition Slugger White said that the Rule in question was 4-2a, which covers playing characteristics changed and foreign materials, but there is no decision concerning what Spieth was hoping to do.

“It was a bit interesting to stump everyone,” Spieth said. “But I had asked a dozen people and nobody knew the answer.”

While the jury is still out on the ruling, given Spieth’s success at this early juncture in his career, it wouldn’t be out the realm of possibility to find out that his spit is considered a performance enhancing drug.