Jordan Spieth: ‘I Would Have Thrown A Fit’ At U.S. Open 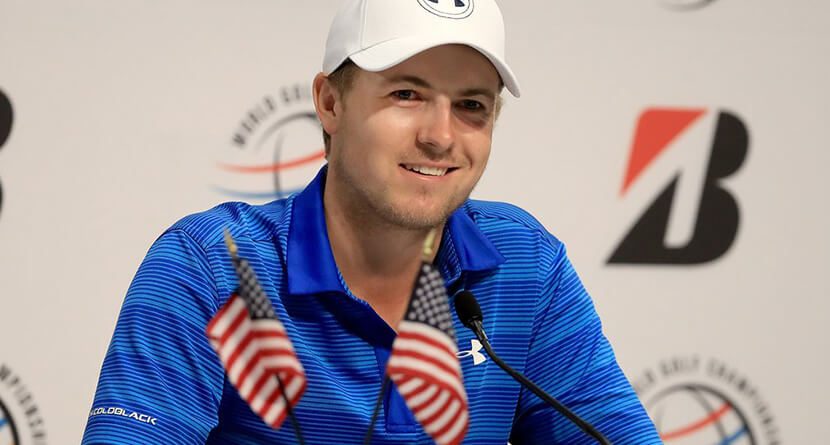 The U.S. Open rules debacle continues to be a point of contention among many of the games top players. With a number of guys in Akron this week for the third World Golf Championship event of the season, media members got their first chance to question the likes of Jordan Spieth, Jason Day and Bubba Watson without having to read their Twitter timelines.

Spieth, the No. 2 player in the world, was one of the most outspoken advocates of DJ during the final round at Oakmont and he didn’t back off that stance in the media center at Firestone Country Club.

Q. On Sunday you Tweeted out regarding Dustin’s ruling. I was just curious, no disrespect at all, were you aware of the rule as it’s written now, or were you going by the rule prior to January 1st?

JORDAN SPIETH: I was going off personal experience, and I’ve had that exact — I’ve had both sides. I’ve grounded a putter before the rule where it was a penalty, even though I didn’t touch the ball, but my putter rested behind it, and then after the rule change I’ve had it to where, yes, it was a gust of wind on fast greens that moved the ball off of where it was located and it wasn’t a penalty, and then I’ve had quite a few occasions where something else caused the ball to move even though I had taken my practice strokes just like Dustin did but I had not put my putter behind the ball but it moved when I was taking practice strokes, and I’ve never seen it called a penalty.

I think there were a couple things. I think if you ask anybody who comes in here, and maybe you have, and maybe they’ve given you their answer, but as far as the guys that I’ve talked to, no one has ever had an incident like that called a penalty, and especially not when a rules official comes in, because that’s what we do. We always bring a rules official in on that. And a lot of times, especially in my case and other guys that are in here, there’s a camera on just about every single shot we hit, and if we’re not comfortable — I’ve asked on multiple occasions to try and find video evidence just to make sure we get it right.

Dustin, I promise you, still believes that he didn’t cause the ball to move, and the rules official agreed, and that’s that. We’ve had it that way.

Q. And so your comments were not based on, hey, he didn’t ground the club, it was just simply he didn’t cause the ball to move.

Q. I know he did, but that wasn’t the reason the call was made. The call was made because supposedly taking the practice strokes and then touching the ground next to the ball —

JORDAN SPIETH: I understand that. I know they didn’t think that there was video evidence, they saw it. I don’t think he caused it to move. Did you step on Oakmont’s greens on the weekend? I’m asking you, did you?

Q. Yeah, I did. I understand what you’re talking about.

JORDAN SPIETH: With the amount of slope which pins were on, on certain holes anywhere from 3.2 to 4 degrees slope on certain occasions and you’re putting often from more slope than that, a 3 mile-an-hour wind can move the ball off of the top — the ball resting on the top of the grass on poa annua.

I believe there was enough time between when his putter was there to when the ball actually moved to be confident in saying he didn’t cause it to move.

JORDAN SPIETH: And I think that it was unfortunate the way it then played out, and they agree, and they said that. And I think that what Dustin did was extremely special given that circumstance. I would have thrown a fit. I promise you, I would have thrown a fit. I wouldn’t have hit another shot. I would have sat there like this is not the way this goes. Let’s figure this out right now. You can’t have a potential penalty or not. You’ve got to know in that case.

Spieth isn’t the first player to say he wouldn’t have moved on not knowing what the ruling would be. Rory McIlroy echoed those sentiments on Twitter during the final round.

This isn’t right for anyone on that golf course. If it was me I wouldn’t hit another shot until this farce was rectified.

Thank goodness for the USGA’s sake that DJ put his golf game in overdrive and made the possible and eventual penalty a nonissue.