Jordan Spieth In Position To Win First Event Of 2016 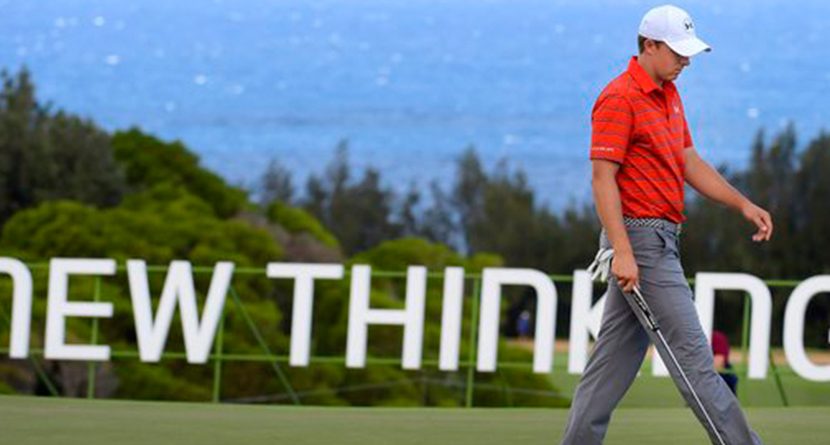 It’s Jordan Spieth’s world and we’re just living in it.

The World No. 1 proved again that Kapalua’s Plantation Course is his playground en route to an 8-under par 65 (that’s right, 8-under 65. Par is 73.). Spieth extended his 36-hole four-shot lead to a five-stroke advantage in round three, sitting on 24-under par for the event.

.@JordanSpieth‘s career in @HyundaiTOC 7 rounds – 1st or 2nd after each one Combined score of -42 Almost as many eagles (2) as bogeys (3)

His closest competition comes from Brooks Koepka who fired a scintillating 10-under par 63 on Saturday to move six spots up the leaderboard into solo second place, thanks in large part to a six-hole birdie run on the front.

Koepka would go on to make 10 birdies total against no bogeys. Koepka is at 19-under for the tournament. Patrick Reed, who came from four behind in the final round last year to win, is six back of Spieth. Brandt Snedeker and Fabian Gomez are nine shots back at 15-under.

Perhaps the shot of the day came from — who else? — Spieth on the 18th, already with a comfortable 54-hole lead in hand.

Jordan Spieth just came within an inch of an albatross. #QuickHits https://t.co/XwizTOGC91

He’d make the eagle putt and now has a(nother) chance at history.

.@TigerWoods is the only player since World War II to win 7+ times on the @PGATOUR before turning 23. @JordanSpieth can join him tomorrow.