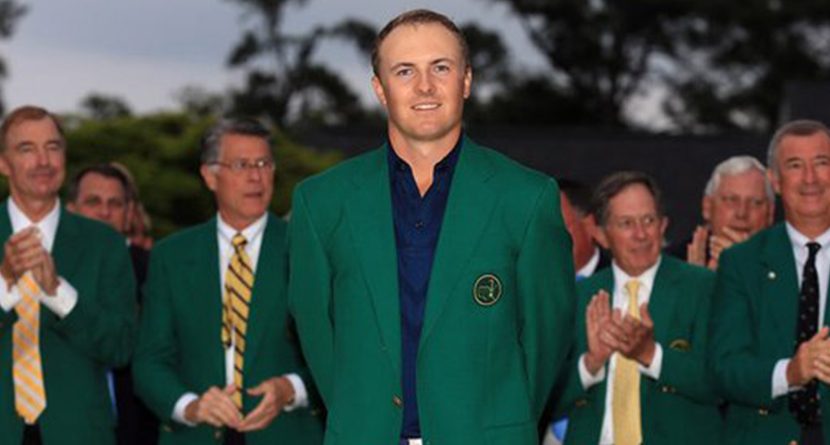 2015 was the year of Jordan Spieth. The 22-year-old Texan won five times, including his first two major championships and the FedEx Cup and he will enter 2016 as the top-ranked player in the world.

Wrapping up his competitive season earlier this month at the Hero World Challenge in the Bahamas, Spieth told the assembled media that following the 18-man event hosted by Tiger Woods, he would be taking a short vacation to a little golf club in Georgia.

Visiting Augusta National Golf Club for the first time since he claimed the Green Jacket by four shots over Phil Mickelson and Justin Rose in April, Spieth knew he would have a new place to change his Under Armour shoes: the Champions Locker Room.

The 28-locker facility, built in 1978, requires two past champions to share a locker, typically a younger player with an elder statesman. For Spieth, last week was the first time he was able to see who his lockermate would be.

“Going back as a member, I went for the first time and saw my name on the big trophy there,” Spieth told Golfweek.com. “Everyone treating you (nicely), saying ‘Mr. Spieth, you have a tab, anything I can do for you? And here’s your new locker room.

“I walked up to see who I was with and I share a locker with Arnold Palmer. So it was a very special moment there.”

Being one of the greatest players to ever pick up a club, it shouldn’t be a surprise just how impressive Palmer’s record was at the Masters, winning the event four times — once every other year for eight years. Palmer finished inside the top-10 for 11 consecutive years from 1957-67.

Spieth has a tough task ahead of him if he wants to be the most decorated Masters champion in his own locker.