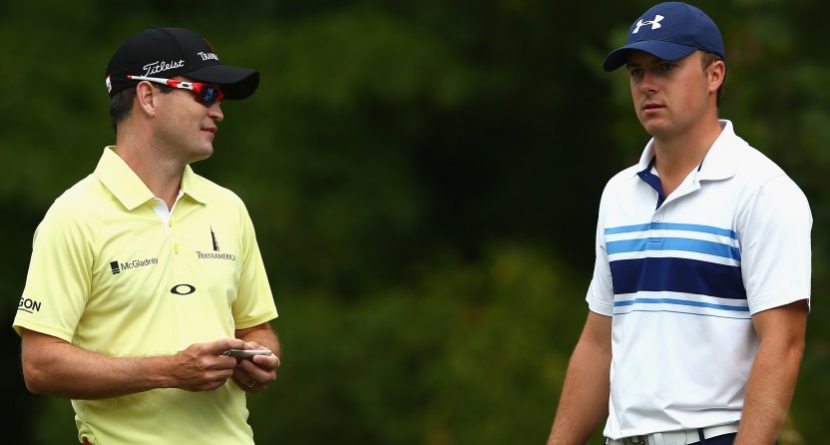 Remember that epic Jordan Spieth victory at the John Deere Classic in July? How could you not? The win made the then-19-year-old the youngest player to win a PGA Tour event in 82 years, and he got into the tournament’s playoff with the shot of the year.

It’s the event that keeps on giving. That one victory earned Spieth PGA Tour status, qualified him for the Open Championship, got him into the FedExCup playoffs, made him the youngest player to compete in the season-ending Tour Championship, and led to his PGA Tour Rookie of the Year honor.

And on Monday, he received the John Deere golf cart that also goes to victors of the tournament.

Thanks to @johndeere @jdclassic my Gator came in today! Thinking about using it on the golf course.. http://t.co/RbvQ6BnF6s

Within hours of that tweet hitting the web, Zach Johnson challenged the youngster to a race. Johnson earned a similar cart for his triumph at the 2012 John Deere Classic.

Spieth, with a typical youthful cockiness, fired right back.

@ZachJohnsonPGA @JohnDeere @JDCLASSIC considering I ordered the same specs as you.. It’s all about who wants it more #youth

Here’s a look at their toys in action: