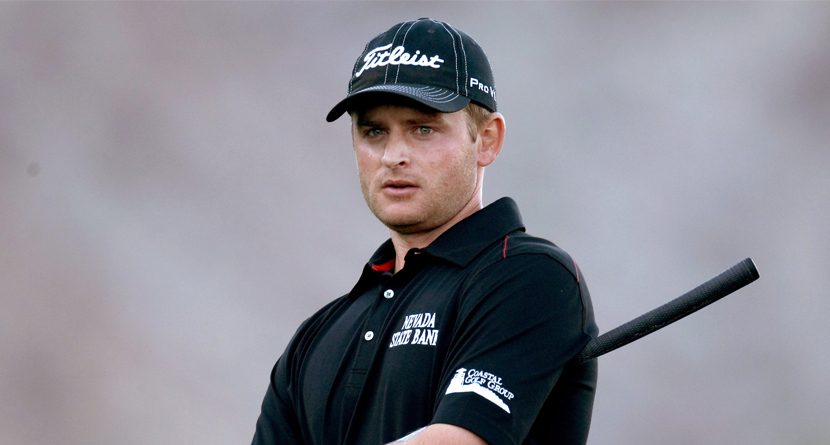 John Merrick isn’t exactly a household name. At least not yet. The Los Angeles-area native held off Charlie Beljan on the second playoff hole to cap off his first career victory at the Northern Trust Open over the weekend. After hitting an errant tee shot on the first playoff hole, Merrick pulled off and unbelievable low 3-iron from under the trees to scramble his way to a par. But, who is this guy? What should we know about John Merrick?

1. Home is where the heart is

Merrick is the first Los Angeles County native to win the Northern Trust Open. Having gone to school at UCLA, he has always been very familiar with Riviera. For someone whose career got off to such a rocky start, Merrick’s win is long overdue. Merrick spent most of 2010 and 2011 fighting his way back on Tour but, it seems as if he may be poised for some sustained success.

For the entirety of his career, Merrick has been an extremely consistent driver of the golf ball. Since his debut on Tour  in 2007, he has ranked in the top-10 in total driving, ball strikig, and fairways hit all at various times throughout. The biggest weakness in Merrick’s game has historically been his putting. For example, in 2008, he ranked 177th on Tour in Strokes Gained Putting. While no one could quite master the lightning fast greens at Riviera, Merrick was finally able to piece it all together.

3. Back to the Masters

In 2009, Merrick shot a final round 66 at Augusta, good enough to finish in a tie for sixth. Before then, his best finish prior was at the 2008 U.S. Open where he also finished in a tie for sixth. With his win at Riviera, Merrick will be headed back to Augusta in April to try and pull off his first win at a major.

It’s no secret that Titleist is “the No. 1 ball in golf.” Well, this past weekend backed up that slogan. With five tournaments around the world concluding on Sunday, all five champions were Titleist staff members. Of course, Merrick was the PGA Tour’s Titleist representative. With the five wins, Titleist’s 2013 win total is up to 14 already. That’s 10 more than the next guys in line.