Justin Rose and Lydia Ko Pick Up Wins in Asia 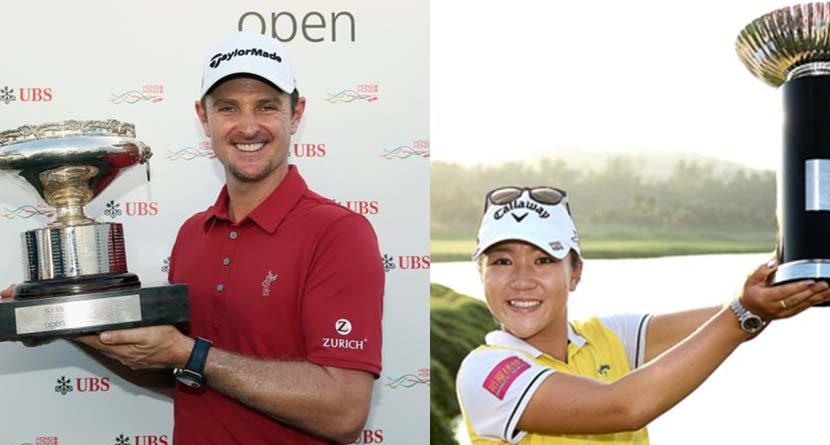 Halfway around the world in Hong Kong and Taiwan, respectively, two of golf’s biggest stars held up trophies on Sunday as Justin Rose and Lydia Ko both took home titles in Asia.

Rose, playing in the European Tour’s UBS Hong Kong Open, outlasted Denmark’s Lucas Bjerregaard to win his second event of the calendar year and his eighth all-time on the European Tour. Rose fired a final round 2-under par 68 to hold off Bjerregaard who was doomed by a double-bogey six on the 14th hole.

Rose opened up a 2-shot lead thanks to a birdie on the 16th, giving him enough of a cushion to two-putt for bogey on the 72nd hole, which he did, sportingly.

The win moved Rose to No. 6 in the Official World Golf Ranking, swapping places with Henrik Stenson, and it moved him into fourth place in the Euro Tour’s Race to Dubai standings as the Final Series begins this week at the Turkish Airlines Open.

Ko had a bit more of cushion than Rose when she made even more history at the Fubon LPGA Taiwan Championship. The 18-year-old Kiwi ran away with her fifth LPGA victory of the season thanks to a final-round 7-under par 65. The nine-shot win was enough to elevate her back to No. 1 in the Rolex Women’s World Golf Rankings.

More impressively, Ko became the youngest man or woman to win 10 times at 18 years, 6 months old. Ko broke the previous mark by nearly three and a half years, which was held by Nancy Lopez. Horton Smith holds the record for the quickest to 10 wins on the men’s side at 21 years, 7 months.

At 18, @LydiaKo has 10 @LPGA wins. According to the LPGA record book, everyone else in tour history has 9 – combined – before turning 19.

Not for nothing, but Ko now leads the LPGA in official money, Race to CME Globe points, scoring average, Rolex Player of the Year and Top-10’s. Not bad for someone who can’t legally buy a beer in the U.S. yet.