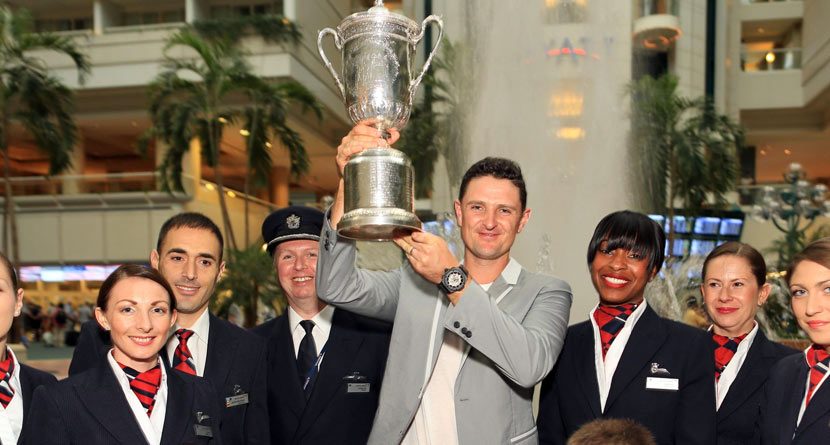 Just two weeks after capturing his first major, Justin Rose boarded a British Airways flight on Sunday morning to head home to London from Orlando to make ready for the British Open at Muirfield July 18-21. He will take some additional time in his homeland to share his victory at this years U.S. Open and prepare for the championship.

Muirfield which is in Gullane, East Lothian, Scotland is one of the most historic venues of the Open Championship. The course in renowned amongst golfers as being perhaps the fairest test of all Open courses, what you see is what you get. The Honorable Company of Edinburgh Golfers – as the golf club at Muirfield is properly known – is one of the oldest golf clubs in the world, and the source of the earliest written rules of golf, which date back to 1744.

Yet the club has only been based at Muirfield comparatively recently: it was in 1891 that the current course was opened and the club moved from its previous home at the links in nearby Musselburgh. Just a year later, in 1892, Muirfield hosted the first of its fifteen Open Championships, which was won by Harold Hilton, one of only three amateurs to have lifted the Claret Jug. Justin Rose became the first Englishman to win golf’s U.S. Open since 1970 with his victory at Merion. Rose followed in the footsteps of Tony Jacklin 43 years ago by dramatically winning the championship in Pennsylvania at Merion Golf Club.

He also ended the long wait for a major winner since Sir Nick Faldo won the Masters championship in 1996. The last Englishman to lift the U.S. Open trophy was Tony Jacklin, who won by seven shots at Hazeltine, Minn., in 1970. Five other Englishmen won the U.S. Open pre-war, while a host of Scotsmen won early editions of the event.

New England Golf Monthly is the #1 read golf publication in the New England region serving the interest of the Rhode Island, Massachusetts, Connecticut, New Hampshire, Vermont and Maine golf communities as well as the organizations in support of the game such as the New England PGA.  Their mission is to supply readers, associations and advertisers with multiple forums to share information and grow the game of golf.