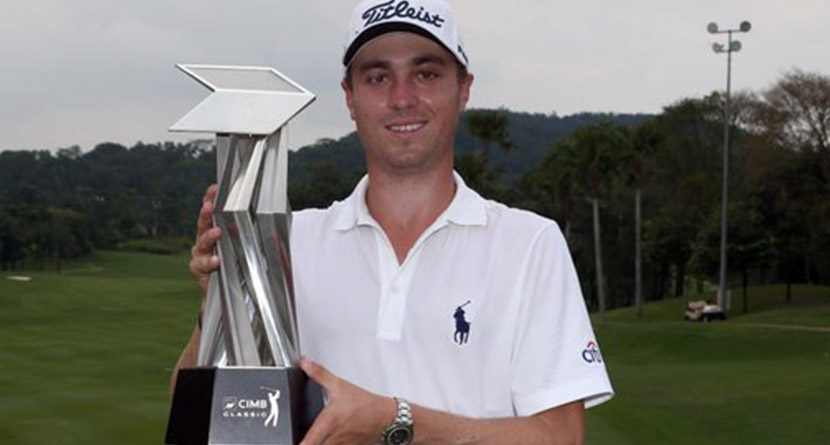 Far too often in golf, young players are saddled with unrealistic expectations. Whether it be the result of a prolific amateur career, some flashes of brilliance in the professional ranks or an enviable skill set, players are often crowned before accomplishments are earned at the highest level.

Justin Thomas ticked all three of those prerequisites.

Coming out of Louisville St. Xavier, Thomas was Mr. Golf in Kentucky as a sophomore. When he got to the University of Alabama, Thomas won his first collegiate event and went on to be named the Player of the Year in Division I as a freshman. After winning the team championship in 2013, Thomas made his way through the Web.com Qualifying School and finished tied for fifth in his first tournament as a pro. He would go on to win the Nationwide Children’s Hospital Championship later that year and earn his PGA Tour card.

All that is to say success has come early and often for the now-22 year old. And for all the world, it looked like 2015 was going to be another year of trophies and accolades for Thomas until it wasn’t. Sure, Thomas racked up seven top-10s last year and made more than $2.25 million, but there is a very real difference between good golfers who cash big checks and those who stick around the 18th green for a trophy presentation.

Sunday in Malaysia, Thomas got to stick around the 18th green for his first PGA Tour trophy presentation, holding off Adam Scott, Kevin Na, Brendan Steele and Hideki Matsuyama to win the CIMB Classic by a shot.

Taking control of the event with a second-round 61, Thomas kept the pedal down firing a Saturday 67 to share the lead with Steele, one ahead of Na. Thomas built up some steam on Sunday, getting to 4-under on the day with an eagle on the 10th. On the 13th hole, tied for the lead, Thomas was bunkered in two.

Justin Thomas is making it from everywhere. #QuickHits https://t.co/vOI9ndTxju

A shot clear and 114 yards out on 14 put Thomas in the go zone, except a lie that left the ball slightly below his feet allowed some demons to creep into his head. Thomas laid the sod over the ball and dumped it in the water short of the green leading to a double bogey.

“I’ve been struggling a little bit on those downhill lies this past, I don’t know, six months or so,” Thomas would say afterward. “That was my miss. I’ve been chunking them. I didn’t really think I was going to do so when I had 114 yards. It was a great scoring opportunity, great chance to make a birdie and get another stroke on the lead, but it was unbelievable. Really the only thing you could do is what I did, just laugh it off, it was that bad of a shot in the circumstance.

“I told myself I had four holes left, that I was leading (before that) point, fortunately. If I was tied or one back when that happened it would have been a huge deal.”

Needing to overcome the bad swing that doomed him on 14, Thomas stepped up to 15 and made the swing of the week.

Thomas would make the putt. He birdied 16 and added a third bird in a row at 17 to not only eliminate the double bogey, but play the previous four holes in 1-under par. With Scott in the house at 25-under, Thomas made a two-putt par on the 72nd hole to secure his first victory on the PGA Tour.

The burden of expectation was one that Thomas addressed in his quick hit interview with Golf Channel’s Arron Oberholser, echoing his words expressed earlier this year on the No Laying Up podcast. And while Thomas can do his best to ignore the narratives trotted out, constantly getting beat down can take a toll. All the expectation and potential in the world can be derailed if it is not validated.

Thomas didn’t allow that doubt to fester, even if the win didn’t come as quickly as he would have liked, 39 events into his professional career.

In Thomas’ case, the “if not when” narrative was accurate. As a PGA Tour winner and 30th in the Official World Golf Rankings, Thomas will be exempt into any and all events, major or otherwise, for the upcoming season.

The saddle of expectation has been unharnessed from Thomas and strapped to another up-and-comer, another case study in whether or not the burden will bear itself out into wins or if it proves too heavy to hold. Thomas needs not to consider that narrative any more. He won.