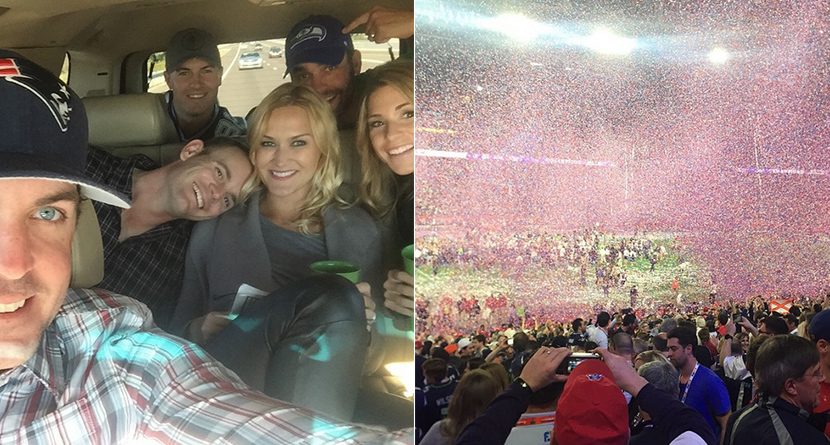 On Super Bowl Sunday, you pull out all the stops.

If you’re at home and entertaining friends, you provide the finest meats and cheeses, not to mention a plethora of beverages.

If you’re playing in the game, you fight for every inch, every yard and every point.

If you’re a PGA Tour star and your favorite team is playing in the big game, you do whatever it takes to get there.

Noted New England Patriots fan Keegan Bradley showed us that much Sunday when he pulled out all the stops to get from TPC Scottsdale — site of the final round of the tour’s Waste Management Open — to Glendale, where his Pats were taking on the Seattle Seahawks.

According to the New York Times, Bradley and good friend Brendan Steele — who just so happened to be paired together in the final round — scrambled to get to University of Phoenix Stadium for the game. In the end, their party joined Jordan Spieth, who was attending with caddie and Seahawks fan Michael Greller. All told, there were seven people, including Bradley’s girlfriend Jillian Stacey and Steele’s wife Anastassia — in a car that sits six comfortably!

The ride cost $126 per hour with a 12-hour minimum. Spieth’s manager also bought a parking pass for more than $300 so the driver could wait somewhere.

That pricetag, however was nothing compared to what Bradley and Co. would’ve spent. According to the article, they were considering taking a helicopter, which cost $900 per person. There were also discussions of a limousine service that ranged from $1,500-$4,000 per hour!

No matter the cost, though, there’s no doubt that Bradley — the die hard Patriots fan — considered the epic Super Bowl victory priceless.