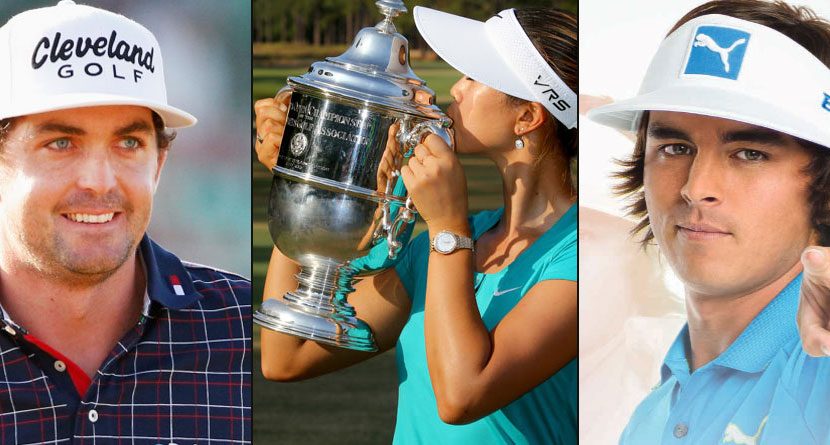 Michelle Wie may have picked up her first major title Sunday at Pinehurst No. 2, but she definitely didn’t do it alone. Sure, she hit the shots — all of them — but she also had her caddie to help guide her along.

She also had the yardage books of Keegan Bradley and Rickie Fowler, two guys who enjoyed their time and played pretty darn well in Pinehurst just over a week ago. Wie made sure to thank them Sunday night via Twitter:

Shoutout to @RickieFowlerPGA and @Keegan_Bradley for writing down awesome notes for me in their yardage books from last week!!!

But that wasn’t enough. According to Bradley, Wie owes her success at the U.S. Women’s Open to … Keegan Bradley:

“@themichellewie:Shoutout 2 @RickieFowlerPGA & @Keegan_Bradley awesome notes for me in yardage books from last week!” I take all the credit

Fowler, on the other hand, was willing to take less than full credit for her win, and advised Bradley to slow his roll:

.@Keegan_Bradley @themichellewie easy there turbo!! We did get a small assist though

Clearly, Bradley was only joking about getting all the credit, but the yardage books had to help. Going forward, Wie will need to rely on notes she or her caddie takes … unless, of course, Fowler caddies for her?

You ready to get your caddy on @RickieFowlerPGA ?!?!? Hahahaha pic.twitter.com/usLpXp2cWV

All kidding aside, Wie was the only player in the field to finish under par for the week, winning by two strokes over Stacy Lewis. Even without yardage books from Bradley and Fowler, she’s been having a career year. Already a winner in 2014 at the LPGA Lotte Championship, Wie also finished runner-up at the Kraft Nabisco Championship, the tour’s first major of the year.

The win in the U.S. Women’s Open feels like a long time coming for Wie, who has already contested 30 LPGA majors as a professional at the ripe old age of 24, and while it’s her first major victory, it certainly doesn’t feel like it’ll be her last.

With or without the help of Bradley and Fowler.