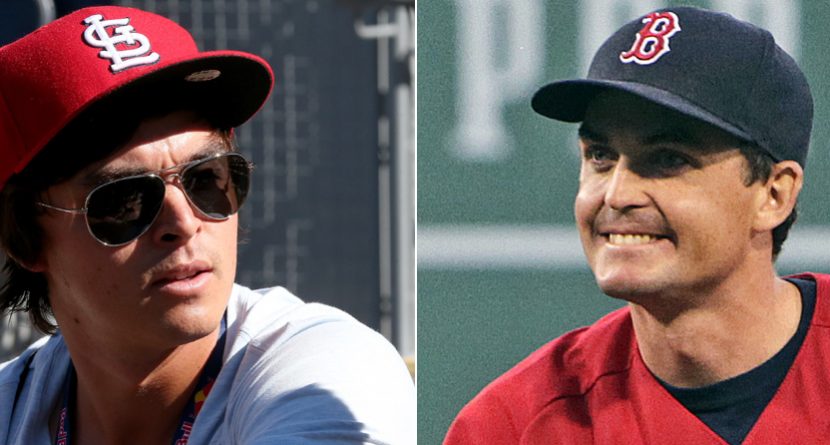 It’s going to be a tense week for Keegan Bradley and Rickie Fowler. The mere sight of Bradley might cause Fowler to go all Dick Fowler on the rabid Red Sox fan. Should they get paired together this week at the CIMB Classic, Bradley might whip out his belly putter and take some swings at the crazy Cardinals fan.

Related: Help Wanted: Jobs Alex Rodriguez Can Do After Baseball

It all depends on how the World Series between the Boston Red Sox and St. Louis Cardinals is going.

Bradley and Fowler are in Kuala Lumpur, Malaysia, this week for their first starts on the new 2013-14 PGA Tour season. Had they known their favorite baseball teams were going to be playing in the World Series, they might have taken another week off and stayed at home in Jupiter, Fla. That’s where both 20-somethings reside and often smack talk each other on one of the plethora of golf courses.

Kuala Lumpur is 12 hours ahead of the Eastern Time zone, so when the first pitch is thrown Wednesday in Boston at 8 p.m. ET, Bradley and Fowler might very well be on the course or getting ready to tee off on Thursday. Game 2 of the series is Thursday night in the States and Friday morning in Malaysia. Game 3: Saturday night and Sunday morning. You can be sure they’ll keep track of the scores back home.

Bradley is about as die-hard of a Boston sports fan as you can find, so that obviously includes the Sox. When he’s not wearing his sponsor’s Cleveland Golf hat on the course, he’s likely donning one of his many Red Sox caps off the course.

In his profile for the PGA Tour, Bradley lists the Boston Red Sox winning the World Series as his biggest thrill outside golf. We’re assuming the native New Englander meant the first one of his lifetime (2004), even though he’s had the luxury of witnessing two (2007 as well).

Fowler, meanwhile, can’t really compete with Bradley’s fandom longevity. He grew up in Murrieta, Calif., which is sort of close to three MLB teams – the town is roughly halfway in between Los Angeles and San Diego, but well east of Anaheim – though not really close to any of them. So when he moved to Jupiter in 2010 and befriended a few Cardinals players when they were in town for spring training, the Cards became his team. He took in a NLCS game last week when St. Louis was in L.A. to face the Dodgers.

But just because Fowler doesn’t have Bradley’s history with the team, that doesn’t mean the smack talk won’t be any less frequent.