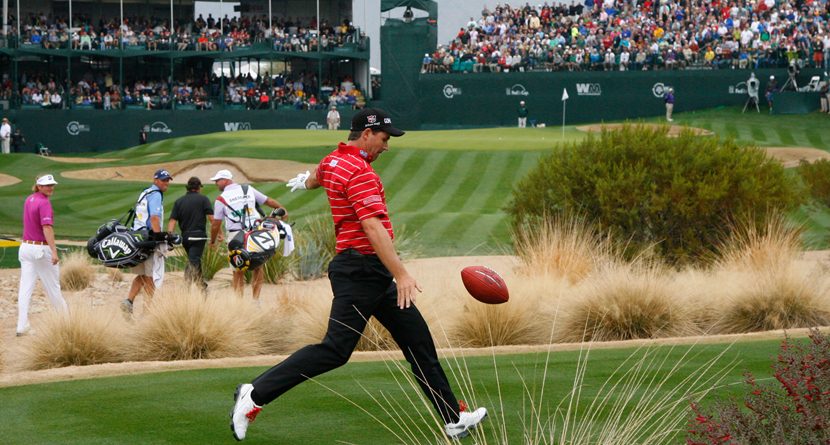 9. Dance off
On Sunday at the Waste Management Phoenix Open, rookie James Hahn slammed home a birdie on the 16th and then crushed it with a Gangnam Style dance. Nice moves, even if at this point this song is about as relevant as the Macarena.

8. Bunker busted
Oh, Sergio Garcia: always a human highlight reel, but usually for the wrong reasons. Here he is at this weekend’s Dubai Desert Classic totally losing his shit in a greenside bunker. Seems like a perfectly sane thing to do, especially when you’re nursing a shoulder injury. How glacial was the pace of play during last Monday’s finish at the Farmers Insurance Open in San Diego? Robert Garrigus was able to complete his round, have a leisurely lunch, fly home to Phoenix, unpack and turn on the TV to find that Tiger Woods was STILL on the course. It took Woods and his group four hours to play 11 holes, a pace that Woods called “so friggin’ slow.” Two Orlando-area golfers are facing criminal charges after they beat the hell out of another player who was complaining about their place of play. Reportedly the 61-year-old victim had been constantly heckling them to speed up until the assailants, both around age 30, drove their cart up to the man and began punching and kicking him. Or, you know, you could just let people play through. Either way.

5. Swimmer is now a swinger Bubba Watson and Hunter Mahan better pretty themselves up and get ready to meet their new stablemate. This week, Olympic swimmer Michael Phelps signed an endorsement contract with Ping—even though the 16-handicapper is far from a pro golfer. The company hooked Phelps up with a full bag of custom-made clubs, a set of sticks that he’ll use on a new season of “The Haney Project.” Hopefully he won’t bring Ryan Lochte along for the ride.

4. Phoenix footballer
For Irishman Padraig Harrington, kicking a “football” usually happens on the “pitch” while wearing a “kit.” (Those are some soccer words that I know.) But at TPC Scottsdale, the Back9 Network ambassador and three-time major winner showed off his NFL-style placekicking skills.

3. Bizarre QR
As someone who has many years of marketing experience, I can tell you firsthand that QR codes are completely stupid. Unfortunately my advice didn’t make it to China, where the Mission Hills golf course got thousands of employees to create the world’s largest scanable code. But unless they also built a 1,000-foot tall iPhone to scan it with, I don’t get this at all.

2. Animal style
After Vijay Singh was implicated this week in a deer antler spray scandal (the substance is banned by the PGA Tour), Golf Digest highlighted the other odd treatments golfers have used in the past. Rocky Thompson, a three-time winner on the Champions Tour, once swore by a liquid that contained pure oxygen—and also a pill made from “horse tail.” But the strangest route was the one taken by Chi Chi Rodriguez, who routinely traveled to Germany to receive lamb cell injections. Don’t they have perfectly good lamb cells in America, Chi Chi?

1. New tunes from Jake Trout
One time in about 1998, my brother and I met golfer Peter Jacobsen at the baggage claim at Chicago O’Hare Airport. Despite it being 1:00 a.m., he posed for a picture with us while my brother unintentionally insulted him by asking if his nearby traveling companion was his caddie. Somehow, Jacobsen recovered from the slight and 15 years later was able to record this new music video. Sorry about that, Jake. Nice song though.