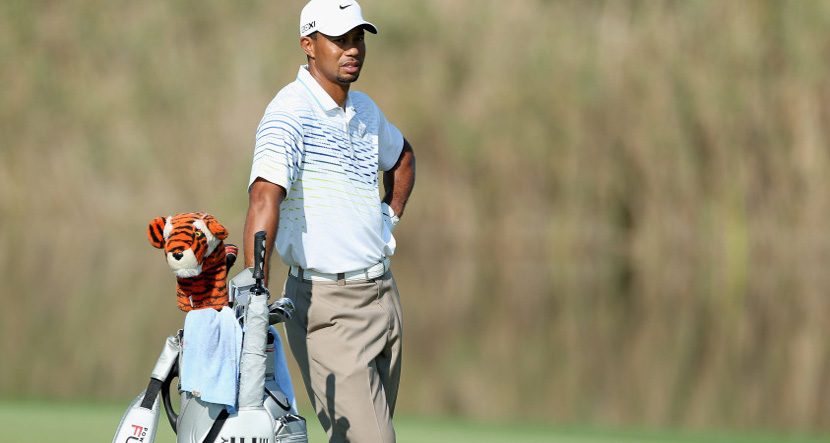 9. The President meets his match President Obama joined former President Clinton this week for a round of golf, but then took his ball and went home after the 13th hole. Obama said he had to attend to White House business, but Clinton joked that he’d been gaining ground and the President just wanted to avoid defeat. Either way, Clinton was the big winner this week as his PGA Tour event, the Humana Challenge, raised millions for charity.

Blockbuster news out of Europe this week as the Euros named international sensation and sex symbol Paul McGinley as their 2014 Ryder Cup captain. Just kidding—I had to double-check who that was, exactly. It turns out that McGinley won a mere four European Tour titles, but has been a force in past Ryder Cups, playing on three winning teams. This Irishman may just be the team’s lucky charm.

Well, that wasn’t what the Nike marketing department had in mind. Just days after the announcement of Rory McIlroy’s new endorsement deal, he and Tiger Woods played together at the Abu Dhabi HSBC Championship and promptly both missed the cut. Highlights included Tiger’s first tee shot that barely left the ground (see below) and Rory’s abrupt switch to a non-Nike putter for Friday’s round. Just do it, huh? Who needs to hit good tee shots when you’ve got an Olympian girlfriend? Rumors are linking Tiger Woods with gold-medal skiier Lindsey Vonn, and he fueled the chatter even further this week when he dropped by Salzburg, where Vonn was doing interviews. Vonn is an occasional golfer who got a hole-in-one during her very first 18-hole round. Tiger Woods is also an occasional golfer—so these two are a perfect match.

For those who prefer their golf in the 8-bit variety, here’s an incredibly in-depth retrospective on the original golf game, Nintendo Entertainment System’s brilliantly named “Golf.”

We haven’t invented time travel (yet), but that doesn’t mean you can’t go back and play Augusta National in the 1930s. A new special “Masters Historic Edition” of Tiger Woods PGA Tour 14 will let you play the course as it was during the first Masters in 1934. The game also allows you to play as modern stars with old-timey clubs and clothing, meaning you can watch Keegan Bradley spit all over the course while he wears a gentlemanly cap.

3. Got it made in Merion

Homeowners near Merion Golf Club (site of this year’s U.S. Open) are ready to cash in this year’s U.S. Open, asking anywhere from $250 to $10,000 per night to rent out their houses to tour players. Tour stars generally pay up to $10,000 for a week of lodging, but Merion is unique in that the nearest hotels are five to 10 miles away. If I were a kid in that neighborhood, I’d start building a treehouse ASAP. Could be worth millions come tournament week.

I don’t know about you, but I pack it in every time the thermometer dips below 50 degrees. Not these folks, though: this group of maniacs in Switzerland competed recently in the 34th annual Snow Golf Cup, playing nine holes on a par-3 course. The greens (mostly just sheets of ice) look like they were rolling about 30 on the Stimpmeter.

1. The greatest child on earth

Some day when I father a child, I hope to indoctrinate him or her into the ways of golf, forcing a putter into his or her hands at the first opportunity. (But you know, no pressure or anything.) Obviously, then, I love this kid who is an incredible player and not yet two years old. Also, he’s a better putter than Jim Furyk.